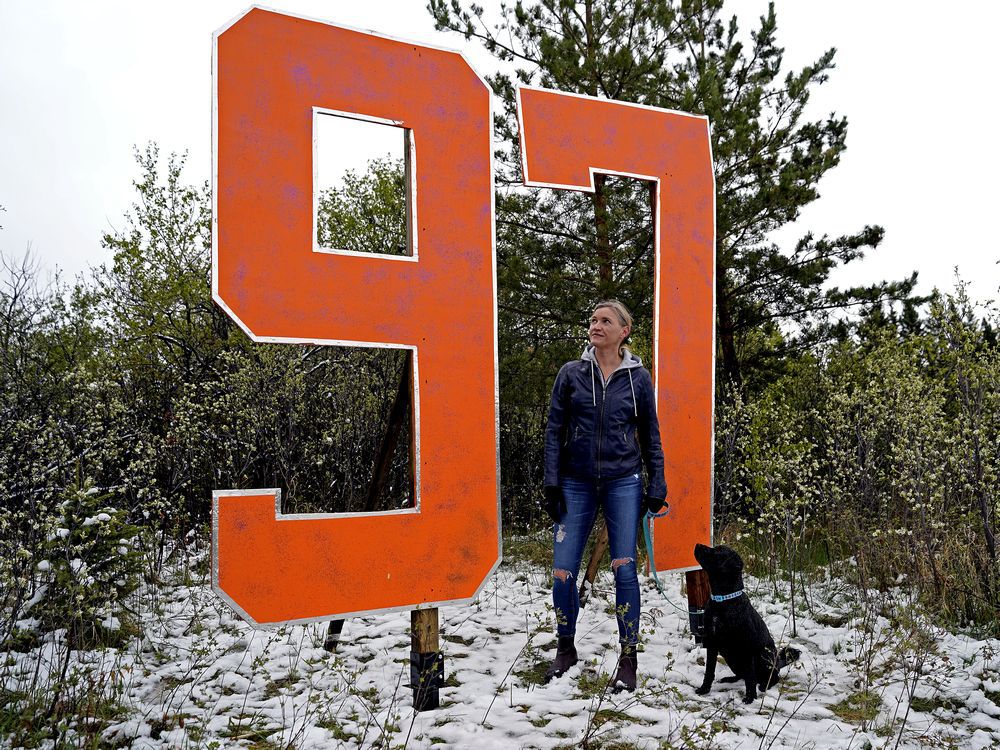 As the puck drops on the Edmonton Oilers postseason, fans aren’t letting the COVID-19 pandemic stop them from cheering on their team safely.

Although current restrictions prevent fans from buying tickets to see the game in person or attending large outdoor viewing parties, residents and businesses are getting creative to show their support. Rules put in place for at least three weeks on May 5 prohibit outdoor gatherings of more than five people.

Fans hoping to enjoy the playoff games with a meal can sign up for a free Downtown Dining Pass for discount offers to several Downtown staples. Looking to take the perfect social media photo to show off your Oilers gear? A giant sign was built Wednesday just off Lansdowne Drive near 47 Avenue showcasing the number “97” to celebrate Oilers captain Connor McDavid ahead of the first round series against the Winnipeg Jets.

United Sport and Cycle on Gateway Boulevard is also getting into the playoff spirit with a drive-thru merchandise shop selling jerseys, flags, signs, face masks and other team swag to help design home Oilers fan caves, operations manager Kelly Hodgson said. As the majority of fans prepare to watch the playoffs from home, Hodgson said he wanted to make sure they have all the merchandise available to them to deck out their viewing spaces in orange.

“We’ve obviously looked at fans and how they like to celebrate the playoffs and it usually has something to do with being at the game, being Downtown, being on Jasper Avenue or Whyte Avenue, and those opportunities just won’t be available this time around,” he said. “But we still think that people, and maybe more than ever, are going to be turning into the playoffs from home.”

It’s all in an effort to show the support of fans without being in the arena, which Oilers Entertainment Group spokesman Tim Shipton said is also being prioritized inside Rogers Place to capitalize on home-ice advantage. Although fans won’t be waving them around, orange pompoms have been placed on every seat in the arena and Shipton said by the end of the playoff run the hope is that at least some of the seats will be filled.

Twelve Edmonton health-care workers were invited to the game Wednesday to sing O Canada with Oilers anthem singer Robert Clark, an initiative Shipton said he hopes can continue and expand in consultation with the Alberta government.

“I think it’s going to be a cool way to welcome back, in a very limited way, some front-line workers to the building,” Shipton said in an interview with Postmedia. “We’re trying to do as much as we can. We’re trying to create that energy, create that edge for our players and do everything we can to help create that home ice advantage.”

If the Oilers advance in the playoffs, this could include the activation of the Ice District Plaza outside of the arena for an outdoor gathering space to watch the game if restrictions allow.

The Oilers 50/50 draw is also carrying over to the playoffs with added early-bird prizes for Game 1 of the series. Proceeds from the first two games will support Operation Frontline Impact, an initiative to support health-care workers who have been on the front lines of the COVID-19 pandemic.