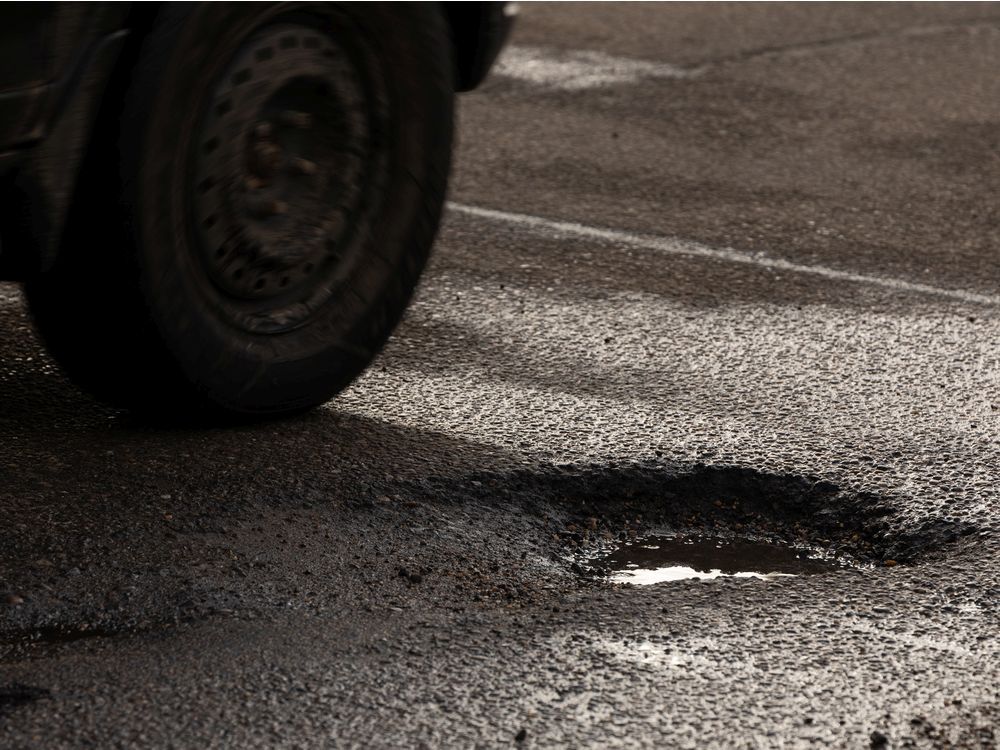 City of Edmonton crews have been kept busy filling potholes on bumpy roads so far in 2021 with milder weather leading to 14,305 repairs, a 95 per cent increase over the same time last year.

Eduardo Sosa, the city’s director of infrastructure maintenance, said the spike can be attributed to freeze-thaw cycles throughout the winter — as well as more of a targeted focus. Pothole repairs are being prioritized by asphalt repair crews over other road deficiencies, such as utility cuts.

“Pothole season never ends in Edmonton and with the milder winter we were able to continue repairing potholes throughout the majority of the winter season,” Sosa said in a statement to Postmedia. “The main factors contributing to pothole formation are traffic loads, pavement age, and condition and climatic factors such as freeze-thaw cycles. As a result, potholes are more likely to form on older roads than newer ones.”

As a result of the proactive approach, Sosa said there have only been 408 pothole notifications from residents to 311 so far this year, more than three times less than the same period in 2020. Residents are asked to continue reporting potholes online or through 311. Crews plan to inspect high-priority locations within 24 hours with a repair complete in two days.

With the increase in repaired potholes, claims to the city for reported damage have dropped to 21, that’s 10 less than the same timeframe in 2020. Less than 10 per cent of damage claims issued to the city were accepted in 2018.

The city is also advising caution on roads and sidewalks as a result of the recent freeze-thaw cycle.

Crews are working to address ice and buildup on roads and city-maintained pathways, including putting graders out to remove ice from gutters to allow water flow when the temperatures rise, the city said in a late Friday news release Friday. Salt and sanding trucks are out to keep roads safe and reduce the amount of ice.

Residents are asked to report ruts or unsafe conditions on residential roads to 311.

“Slippery sidewalks are dangerous for everyone. Property owners are asked to ensure sidewalks adjacent to their property are safe to walk on and clear of snow and ice. Please use sand/salt to improve traction. Free sand is available throughout the city at City of Edmonton roadway maintenance yards and community league halls. If a community sandbox is empty, please call 311,” the city said in the release.

Temperatures are expected to go above 0 C again on Monday.

Periods of rain ending this afternoon then cloudy with 60 per cent chance of showers. Amount 10 to 20 mm. Wind east 20 km/h...
Read more