The Public Health Agency of Canada said it’s “looking into” incidents in which international travellers entering Canada are not compliant with the new rules under the federal Quarantine Act amid concerns over the spread of more contagious COVID-19 variants.

As of Monday, anyone entering Canada must take a novel coronavirus test on arrival and at the end of their mandated 14-day quarantine. Air travellers landing in Canada must also reserve a three-night stay at a government-authorized hotel at their own expense as they wait out the results of their COVID-19 test.

If the test result is negative, travellers can leave the hotel and spend the rest of their 14-day quarantine period isolating at home.

Those entering Canada must also electronically submit a quarantine plan, travel and contact information to the federal government before crossing the border or boarding a flight.

“Travellers are legally obligated to follow the instructions of a screening officer or quarantine officer through the 14-day period, whether in regards to testing, transit to locations, their mandatory hotel stopover or during quarantine at home or other suitable location,” a PHAC spokesperson said in an email Wednesday.

“If they do not follow the instructions, there are penalties including a maximum fine of up to $750,000 or imprisonment for six months.” 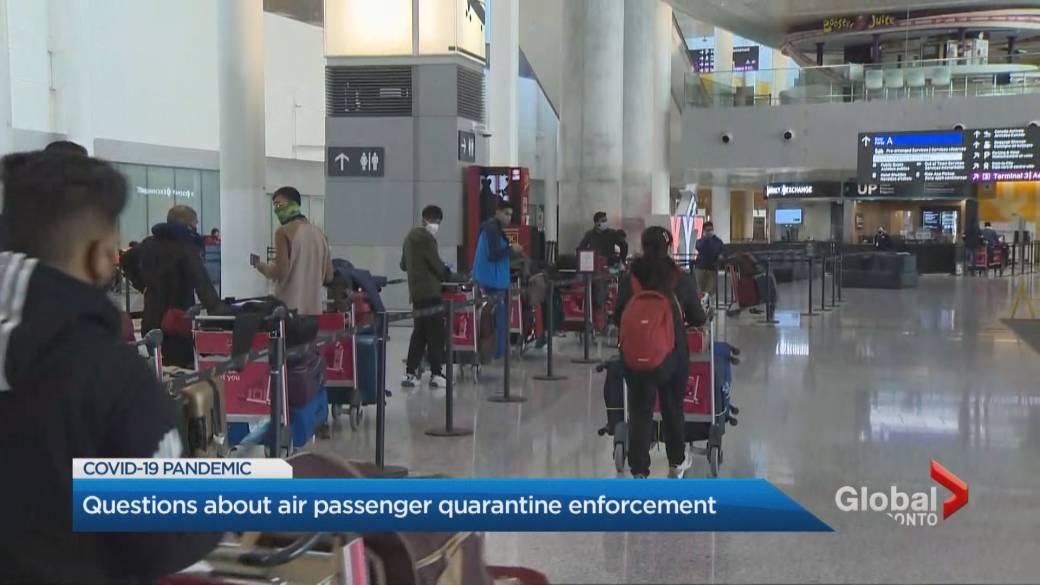 PHAC said all travellers legally obligated to follow the 14-day quarantine period will be subject to compliance.

On Wednesday, a Canada Border Services Agency (CBSA) spokesperson said travellers are referred to PHAC when questions arise among border officers with regards to a traveller’s quarantine plan, health status or documents.

The CBSA spokesperson, Jacqueline Callin, said border officers have the authority to review, challenge and confirm travellers’ statements and to direct them to a quarantine officer. She also said travellers without a valid COVID-19 test may be directed to a designated quarantine facility by PHAC officials.

Read more: Flying back to Canada? Here’s what you can expect at the new COVID-19 quarantine hotels

“Before making a decision on whether or not to allow a traveller to enter Canada, a border services officer will review and consider each traveller’s unique circumstances,” Callin wrote.

Global News spoke with several local police services in major Canadian cities with international airports that all indicated they’re taking a “support” role for PHAC when it comes to enforcing the new rules under the federal Quarantine Act.

Peel Regional Police have issued 49 tickets to travellers who refused to take the required COVID-19 PCR test under Ontario legislation up to and including Feb. 21. Since the new federal rules came into effect Monday, officers said they haven’t handed out any fines under Canada’s Quarantine Act, which now overrides the provincial coronavirus travel laws.

“At this time, we are working in a support role for the Public Health Agency of Canada (PHAC), as they are the lead agency in the federal effort to combat COVID-19,” Peel police said in an email.

Read more: ‘They want to lock us into a hotel’: Snowbirds criticize new travel measures

“There have been several instances of non-compliance with the new regulations under the Quarantine Act, however, the majority of those instances were resolved after conversations with the individuals. Some individuals that still refused to comply with government mandates were issued fines.”

Unless there are “aggravating” circumstances or instances that place people in danger, Peel Regional Police are not detaining those who fail to comply with the new federal quarantine rules. While officers have the authority to enforce the new laws, they say they’re allowing PHAC to take the lead.

However, once air travellers arrive at a federally-approved hotel for their three-day stay, police say there’s nothing that’s forcing them to stay there.

The Service de police de la Ville de Montréal (SPVM) said it acts as support for PHAC when it comes to the federal Quarantine Act but that it’s PHAC’s responsibility to notify the service of cases of non-compliance.

SPVM said it doesn’t have statistics on the general findings or violation reports issued under the Quarantine Act.

Read more: ‘We need to protect each other’: How travellers arriving in Montreal are handling new COVID-19 rules

On Monday, travellers arriving at Montréal-Trudeau Airport told Global News they understood the need to quarantine at a government-approved hotel but expressed frustration over the difficulties faced when booking their accommodation.

Travellers said it took hours to reach someone by phone to reserve a room at a government-designated hotel in Montreal.

On Monday, the Aéroports de Montréal (ADM), the authority that oversees the airport, said in a statement that it expects to receive anywhere between 500 and 1,000 international travellers each day this week.

The Calgary Police Service told Global News it hasn’t received any requests from PHAC for enforcement at government-approved quarantine hotels in Calgary.

Police said officers are able to enforce the Quarantine Act, although this would have to come as a request from PHAC.

The Calgary Airport Authority said PHAC is responsible for ensuring compliance with the federal Quarantine Act, including confirming travellers have a government-approved hotel booked when arriving in Canada.