Edmonton’s bus network will be shaken up on Sunday with new routes, schedules, bus numbers and stops as the city revamps the system for the first time since the late 1990s.

More than 120 bus routes, not including school specials, will hit the streets as part of the city’s plan to improve connectivity across the city and encourage more ridership. The new system will have about 100 fewer routes than the current network, but will reinvest the buses and service hours to increase frequency on routes connecting to different quadrants of Edmonton.

Nine “frequent routes” with single-digit bus numbers will run in central areas of the city at least every 15 minutes during peak periods and six “crosstown routes” with double-digit numbers will connect transit centres in different quadrants of the city, like West Edmonton Mall and Mill Woods.

These two new route offerings are the most exciting part of the transit revamp to David Cooper, an Edmonton-raised transit planner who consults on projects across Canada. Cooper, also the founder of Leading Mobility, said he believes Edmonton is headed in the right direction to provide better connectivity across the city with the addition of high-frequency routes. Other North American cities have gone in this direction, Cooper said, pointing to Houston, Texas, as an example where ridership shot up as a result of the high-frequency network.

“I think Edmonton’s done a pretty good job in the sense of finding the right balance between coverage versus ridership,” Cooper said in an interview with Postmedia. “They actually reinvest so many of those service hours into a high-frequency grid that Edmontonians will really benefit from. Significant parts of the city will have such frequent access to service they’ve never had before and I think it’s going to be quite alluring.”

The redirection of service hours to provide more frequency on some routes led to the elimination of some others that travelled deep into the heart of suburban neighbourhoods. About 93 per cent of homes will be within 400 to 600 metres of the nearest bus stop, about a five- to seven-minute walk. Some communities lost service within 600 metres of homes and became eligible for the on-demand shuttle service which will launch Sunday in conjunction with the new bus routes.

It’s not going to be perfectly received on Day 1, but Cooper said he’s hopeful transit users give the new system a chance and try out all the trip options available to them before calling for changes.

“A lot of people are going to like the service and a lot of them are not, and what needs to be very deliberate and very careful is that Edmontonians need to give the new system a chance,” he said. “Edmonton transit’s changing how you actually transport yourself around the city so of course there’s going to be some concerns and challenges.”

Local transit union president Steve Bradshaw said the new network will be a learning curve for both riders and operators adjusting to the new routes and it’s not going to have instant success.

The new bus network was approved by city council in November 2019 and was supposed to come into effect last August before being delayed six months as a result of the COVID-19 pandemic.

Transit users can use the Transit app or the online trip planner to check the routes closest to them in advance of the launch Sunday. 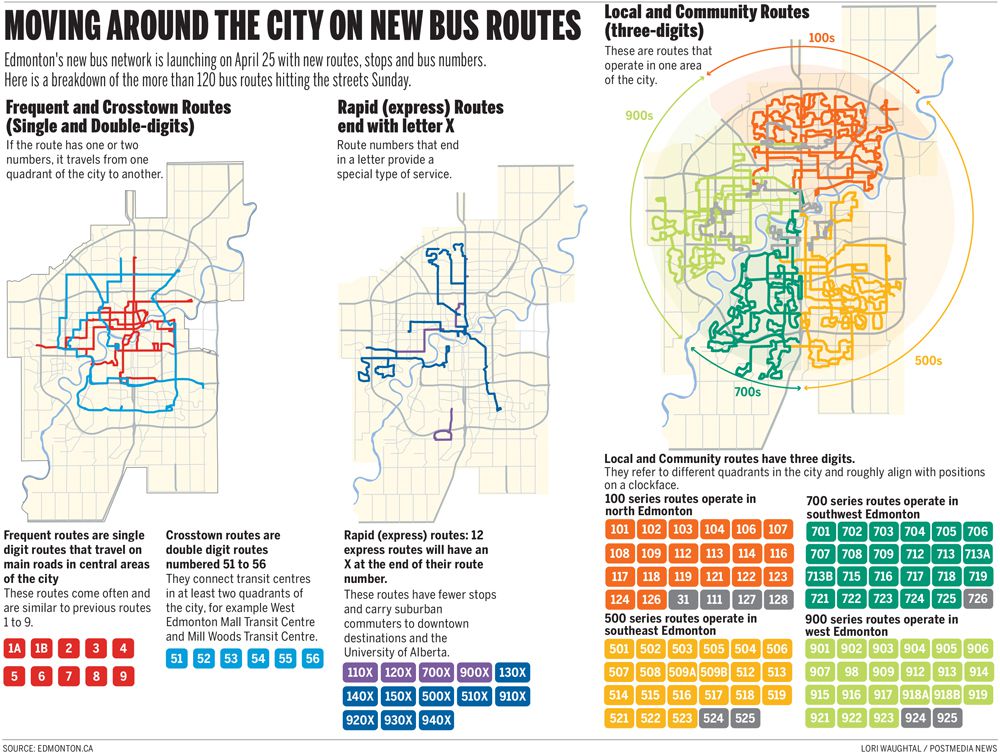