Mike Smith’s play this year has to be a humbling moment for all us Oilers know-it-alls.

We doubted the big man.

He’s sticking it to us in the best possible way.

Of the 47 NHL goalies who have played more than 10 games this year, Smith has the fourth best save percentage, .927.

I could not be more pleased.

The same goes for Jujhar Khaira and Kris Russell. They’ve had all kinds of doubters, including me.

It’s not a stretch to call Smith, Khaira and Russell a few of the main whipping boys of the Oilers fan base.

They’ve all had more than their fair share of criticism, but they’re all sticking it to their critics right now at least with strong play.

The case of Jujhar Khaira

In Khaira’s case, the doubters included Edmonton Oilers coaches and management, as the player was put on waivers on January 11. Not one other NHL team claimed the big centre.

I had also given up on Khaira at that point, just like I doubted Smith was a solid bet to stay healthy and provide consistently sound net-minding this season.

But Khaira has stepped up and is playing better, tougher two-way hockey as a third line centre than Riley Sheahan did last year. There are few players in the NHL more likely to throw a hard hit than Khaira, and he’s suddenly found the confidence to make smart players to advance the puck out of his own end. His slot defence has been strong.

He’s become the player that I had hoped he’d become when he graduated from the American Hockey League, having come to be a dominant two-way player in that league.

Can he continue to lockdown the third-line centre spot with such dogged, fierce and effective play? Consistency has always been an issue for Khaira but he’s having a fine stretch right now, playing well enough to earn a new NHL contract.

The case of Kris Russell

As for Russell, one faction of fans has for years lambasted both the player and Oilers management for giving him a four-year deal at $4 million per season. But Russell has made good on the bet Edmonton placed on him. He’s provided some of the stingiest slot defence in the NHL year after year.

Goals plus-minus is a profoundly misleading stat to rate players over part of a season, or even for a full NHL season. But over many seasons, it gives some indication of player’s true talent. Russell has been a plus or even player in four out of five of his Oilers’ season, this on a team that has often struggled at even strength. 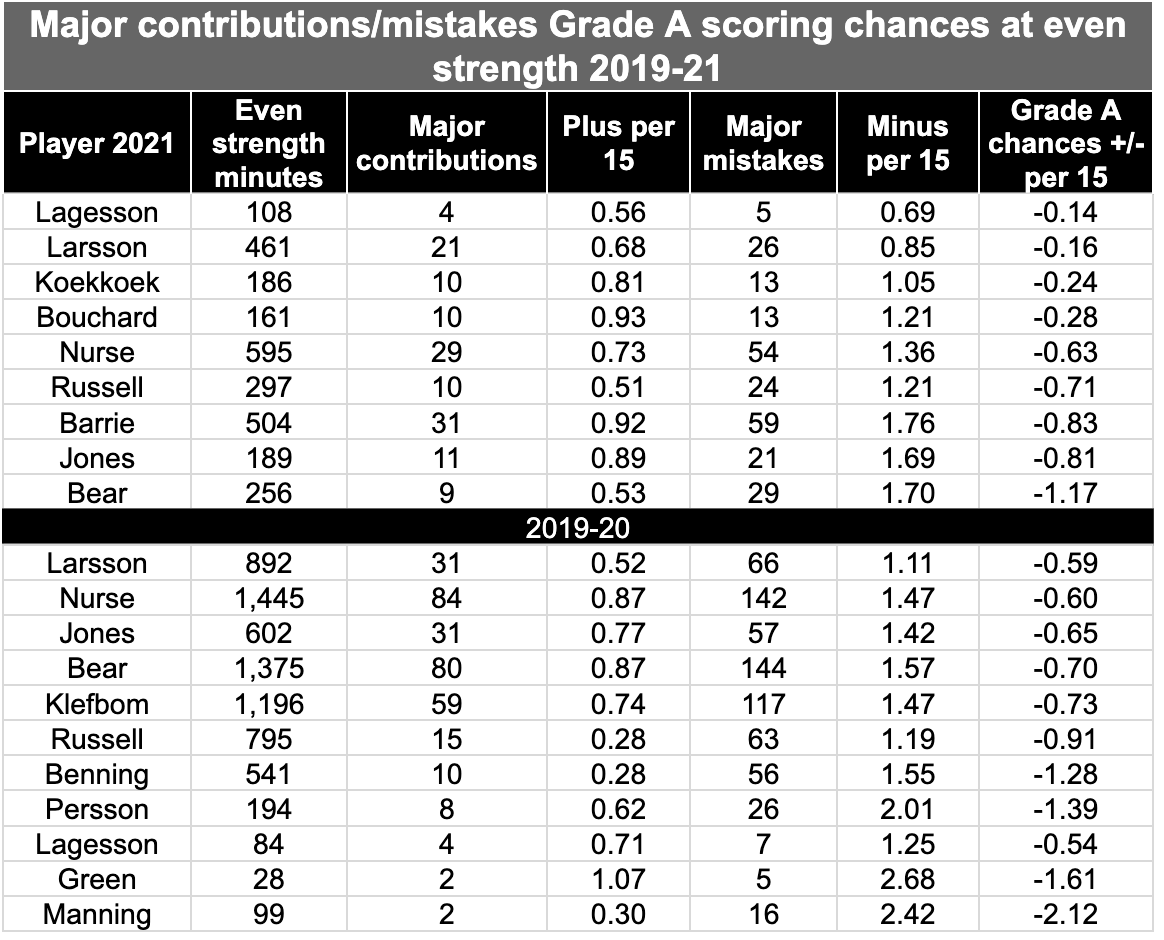 My own assessment is that Russell’s play dropped a bit last season. He was still a staunch defender, but not quite as staunch, and the Oilers needed more adept puck moving than he provided. Caleb Jones, William Lagesson and Slater Koekkoek all looked like better bets than him heading into the season, but Russell has fought his way to get more time on ice at even strength than any of them.

On Thursday, Oilers GM Ken Holland could be heard singing Russell’s praise. “I think he’s played great for us all year…,” Holland told reporters. “He plays a style of game that come playoff time, he goes to the hard areas, he battles, he competes, he blocks shots.”

How can we fairly and accurately assess Russell’s defence?

There are few statistics — at least stats available to the public — that fairly and accurately rate defensive play. It’s the hardest thing to quantify with numbers.

But we know an NHL d-man is doing his job when you don’t notice him, when he doesn’t make major mistakes on the most deadly Grade A scoring chances against.

We track this at the Cult of Hockey, doing intensive video review of all scoring chances for and against to see which players deserve credit and blame.

Can you trust our work? Good question.

We report our findings in public and time-stamp them so anyone can check our work. That’s one way we try to control for bias in what is a detailed and labor intensive but subjective exercise in assessment.

One more thing — I make the first assessments, then my sharp-eyed Cult colleague Bruce McCurdy goes over my findings. We discuss them, then McCurdy make the final call. This form of peer view is another way we control for bias.

It’s a lengthy process but we put in the work so that we can more fairly and accurately judge the two-way play of Oilers players in one crucial aspect of the game, Grade A scoring chances.

I’m OK if others have questions about our work and ignore our findings. Fundamentally, I’m doing this work for myself. You see, I comment on the Oilers in public and I feel there’s a great onus on me to be fair to the players and accurate as possible in my assessments of them. That’s why I go through this process.

I don’t feel I’ve come close to understanding how the Oilers did or how various players did if I don’t go through this video review process each game. If I just watch a game without such intensive video review, I feel like I’ve just barely skimmed over it.

With that pre-amble said, here’s what we’ve found with Oilers d-men when it comes to making major mistakes on Grade A chances against this year:

Some fans argue that Caleb Jones and/or Ethan Bear should play ahead of Russell, but I’m going to suggest that Oilers coaches haven’t been crazy this year to go with Koekkoek early on, and with Lagesson and Russell right now.

The fact is that Oilers coaches do not put nearly the same weight in Corsi stats, and in other on-ice stats, as some fans do. If the coaches did, their line-up choices would be much different.

Oilers coaches watch games closely. With decades of hockey knowledge, they dig deeply into video and analyze it. They look carefully at individual play of individual players. They go by that process.

You will sometimes hear Oilers coach Dave Tippett talk about the scoring chance data that the team tracks. I don’t know their exact process or findings, but I’ll bet you that it has identified Lagesson and Larsson’s excellent defensive play and Russell’s consistently fine defensive work. It’s also identified that Bear and Jones have struggled on defence this year.

As for the future of Smith, Khaira and Russell, as well as Bear and Jones, who knows?

Smith is 38 and Russell is almost 34. There is plenty of milage on them. A wheel could fall off at any time. The engine could blow.

But I’m enjoying their strong play now while it lasts.

And I’ll admit when I got it wrong.

I got it wrong early this year with Smith, Khaira and Russell.

"I get messages from people all over Edmonton, Mill Woods all the time telling me that they're excited for me to come home, and...
Read more

The best thing Ken Holland could do for the Edmonton Oilers is “slow it down”: 9 Things