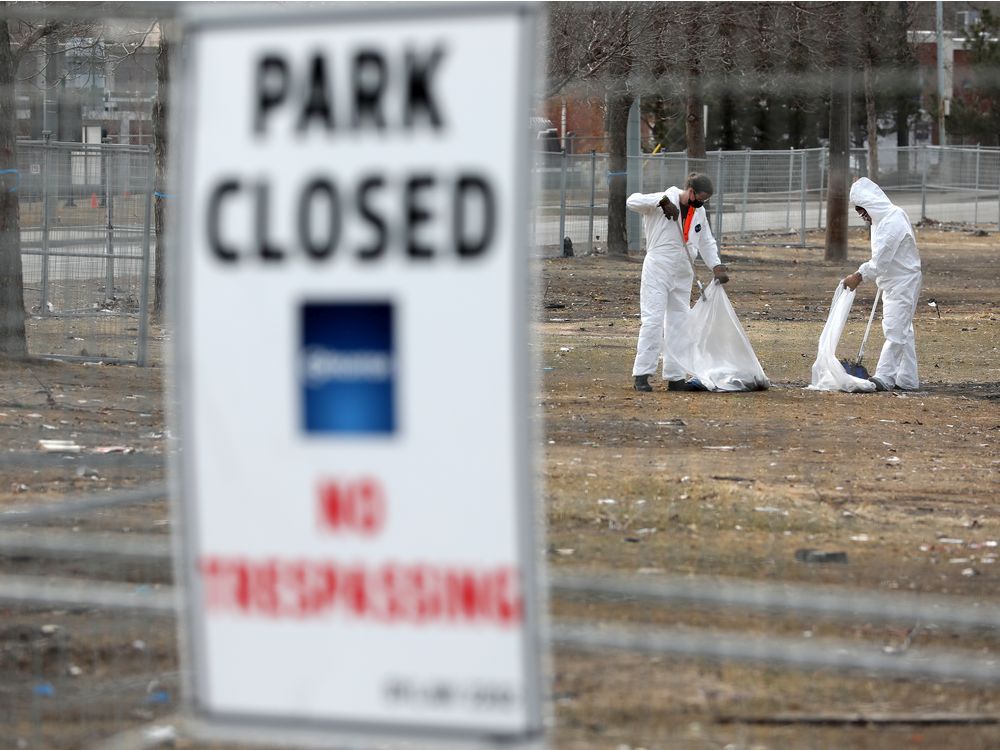 Clean up of tents, needles and debris at the Rossdale green space that morphed into a large homeless camp last year cost the City of Edmonton an estimated $50,000 to date and remains fenced off to the public for the “foreseeable future.”

Camp Pekiwewin popped up near Re/Max Field last July to provide vulnerable Edmontonians a place to stay. As time passed, hundreds of people called the camp home as tents and other temporary shelters were erected.

The camp was started, in part, to put a spotlight on gaps in services provided by the City of Edmonton to those facing housing challenges during the global pandemic. The camp population increased as capacity in city homeless shelters dwindled in response to the COVID-19 pandemic, forcing more people outdoors throughout the summer.

The camp was closed in November as the city opened the Expo Centre as a temporary shelter. City staff spent two weeks cleaning up the remnants of the camp last winter and returned to continue the remediation this month.

Crews returned to the site in April wearing Tyvek suits, gloves and masks as they picked up more garbage.

City spokeswoman Carol Hurst said crews were on scene to continue the clean-up and assess damage to the turf and surrounding greenery.

“Once the assessments are done, some turf rehabilitation will likely be needed. The site will remain closed for the foreseeable future,” said Hurst in an email. “The costs of cleanup to date is approximately $50,000.”

Shima Robinson, a spokeswoman with Camp Pekiwewin, said the $50,000 is just a drop in the bucket in terms of the money the city should be spending on wrap-around services to assist in helping vulnerable Edmontonians.

“I realized that the $50,000 might be an unplanned expense, but they need to plan for much greater expenses when dealing with the issue of houselessness,” said Robinson.

She said she recognized the city has made some announcements around funding of different shelters recently. The move to open the Expo Centre allowed people to get inside during the winter but there were still issues around storage, accessibility, capacity and the level of security and policing happening at the facility, she added.

Robinson said there are no plans to reopen a camp this summer and that it was never the plan to do so annually. She said the focus now is looking at how to effectively advocate for those that needed Pekiwewin.