EDITOR’S NOTE: The original headline for this article said Alberta schools were moving to online learning for three weeks. For clarity, it has been changed to say two weeks as the measure will be in effect for only a little more than two weeks.

With Alberta’s already high number of COVID-19 cases and hospitalizations still growing, Premier Jason Kenney announced new restrictions for parts of the province on Tuesday aimed at keeping the health-care system from being stretched beyond its capacity.

Kenney, in a live address on TV, social media and the United Conservative government’s website, said the next three weeks are critical and that potential catastrophe awaits.

Some of the rules take effect immediately, while others will kick in at the end of this weekend.

“These stepped-up measures will take effect province-wide, with the exception of a few communities that have very low levels of spread,” Kenney told Albertans. “Our province has entered a critical stage of the COVID-19 pandemic.

“We have set case records. What’s more concerning, we have also set a record for the number of Albertans with COVID(-19) in intensive care.”

The provincial government said municipalities or areas with less than 50 cases per 100,000 people and with less than 30 active cases will be exempt from the restrictions. 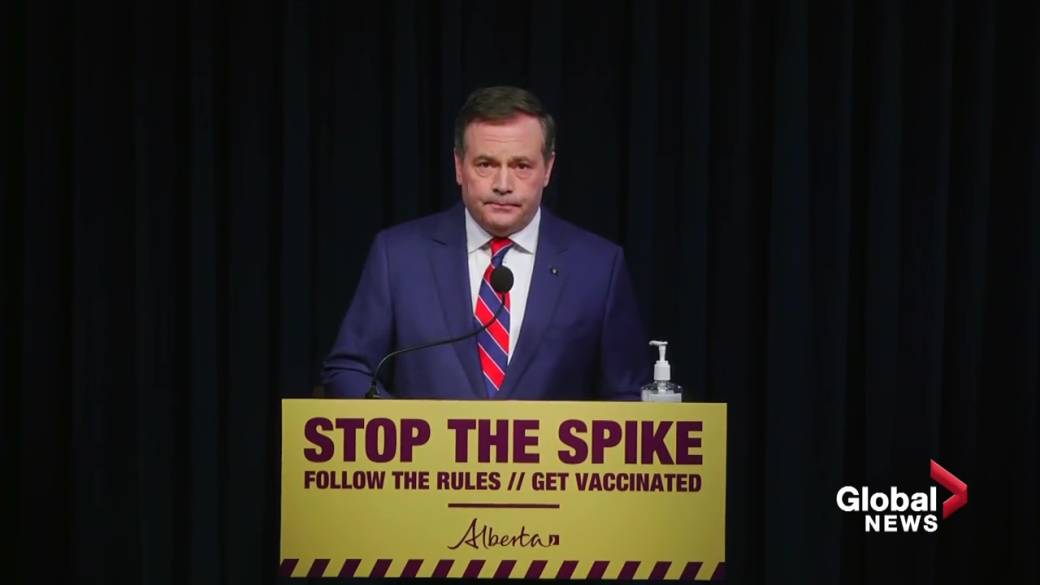 Among the new measures being implemented are that, effective Friday, all students from kindergarten to Grade 12 will temporarily move to at-home learning until May 25.

Students with disabilities who need to continue to attend classes in-person will be exempt from the rules. Many of Alberta’s schools have already moved online.

Post-secondary classes will also all be moved online.

Businesses will also be affected by the restrictions. Kenney announced that capacity at retail shops will be reduced to no more than 10 per cent of customer capacity.

Starting Sunday at midnight, restaurants and bars will no longer be allowed to keep patios open, and can only offer take-out and delivery. Also, personal services like hair salons, tattoo studios, tanning salons and nail salons will be forced to close for three weeks. 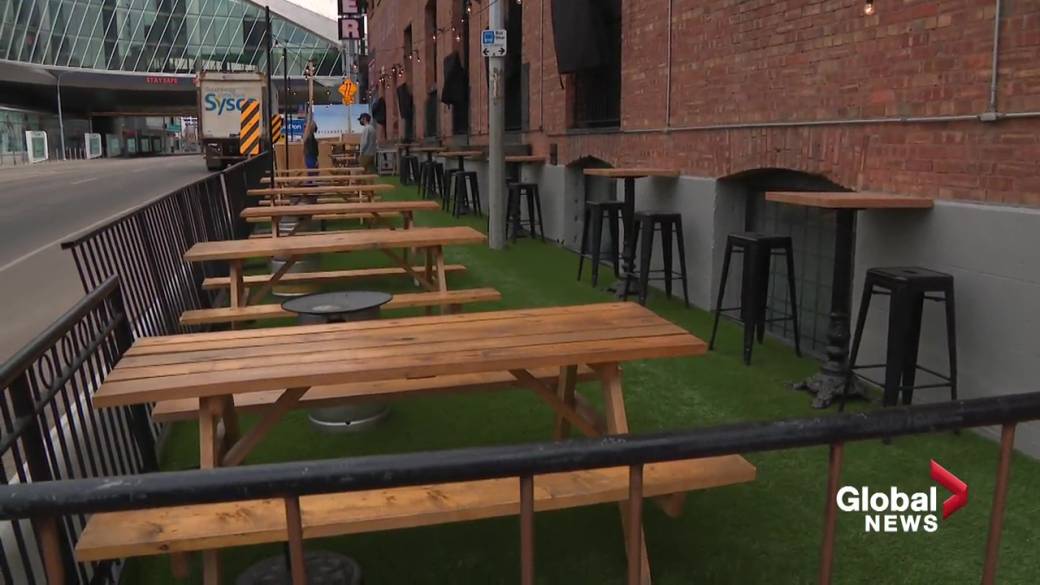 The premier announced attendance at places of worship will be capped at 15 people — instead of 15 per cent capacity — while the maximum attendance at funerals will be reduced to 10 people.

The maximum number of people allowed at outdoor gatherings will be lowered from 10 to five, while Kenney added “a strong recommendation” that people limit their gatherings to two family cohorts.

“Outdoor sports and recreation will be limited to household and close contacts only,” Kenney added.

“And youth and adult performance will close.”

“I know this is all discouraging to hear,” Kenney said. “Nobody wants to be here — especially after 14 months and multiple waves of this pandemic.

“But our commitment to the health and safety of Albertans must come first.

“The good news is we have vaccines on our side. They are already working wonders and they are finally arriving in larger and larger numbers.” 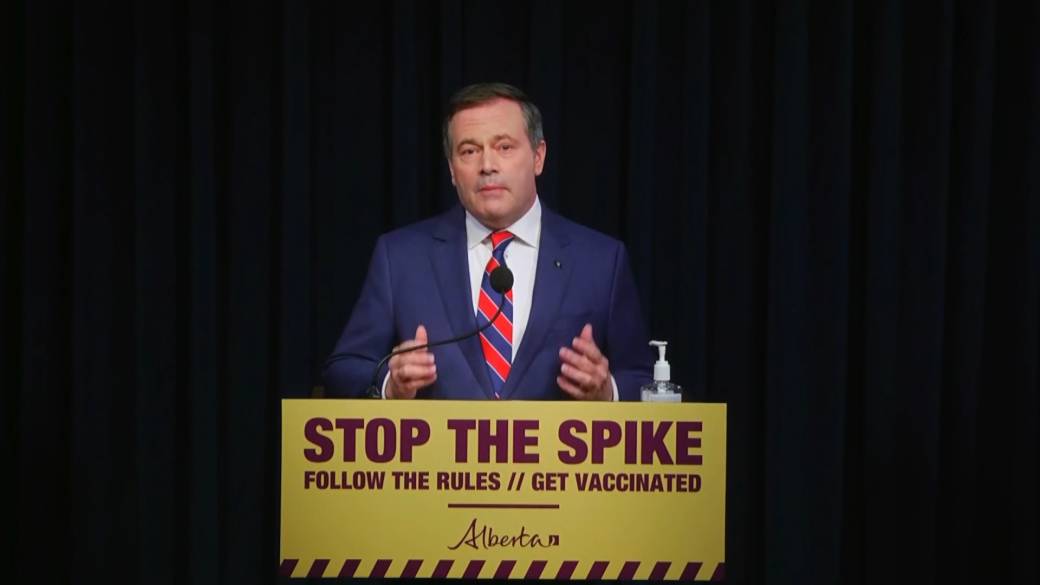 Opposition Leader Rachel Notley held a news conference shortly after Kenney spoke and said his address left her with a number of questions, specifically about parts of the province that would be exempt from the new restrictions.

“He needs to give us more information: where are these (restrictions)? Where are they not?” she asked. “Why is there a difference? Is it just defined by UCP MLAs? And how long will this last?

“Because quite honestly, I don’t think there’s a person out there that thinks two weeks is going to do the trick.”

The premier’s address did not provide an opportunity for reporters to ask questions — something Notley disagreed with.

She added she was disappointed Kenney did not bring up the issue of providing more Albertans with the opportunity to receive paid sick leave, something she said medical experts have argued could significantly help to slow the spread of COVID-19.

“I fear so many… (workers) will, as a result, be forced to choose between staying home to prevent transmission and paying their bills,” Notley said. “Scientists in Ontario have suggested that provision of sick pay could drop infection rates by 50 per cent. But today there was no mention of that from Jason Kenney at all.

“For people to follow the rules, the government must step up and provide adequate financial support to the small businesses that are being jeopardized by these last-minute decisions,” she added.

Kenney announced the new restrictions Tuesday despite over a dozen members of his own government formally criticizing his use of public health restrictions to battle COVID-19.

The premier reiterated to Albertans that his government continues to try to balance protecting “both lives and livelihoods throughout this pandemic.”

“This has meant resisting pressure to implement widespread lockdown policies — recognizing their severe impact on peoples’ lives,” he said. “Governments must not impair peoples’ rights or their livelihoods unless it is absolutely necessary to save lives, and in this case, to prevent a disaster from unfolding in our hospitals.

“Unfortunately, that is the situation we are facing today.” 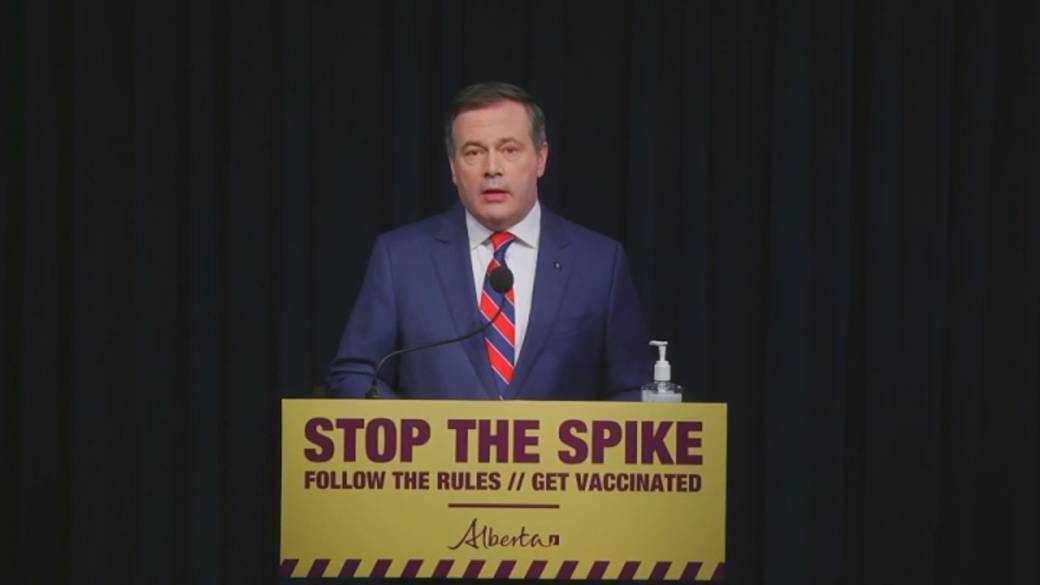 Kenney said even though most Albertans over 50 have had a single dose of a COVID-19 vaccine already, the novel coronavirus continues to spread “at an alarming rate — especially amongst younger people.”

“That is why we must act now to stop the spike,” he said. “If exponential growth of COVID-19 in Alberta continues, it would begin to push the outer limits of our hospital capacity within weeks.”

Kenney said there are currently 226 Albertans in ICUs across the province, 150 of them because of COVID-19.

“That’s far more than the total number of ICU beds that we would have available in a typical year,” he said, adding that “if pressed,” the province has the ability to open up to 425 ICU beds.

However, doing so would require “mass cancellations of surgeries and other care,” the premier noted. 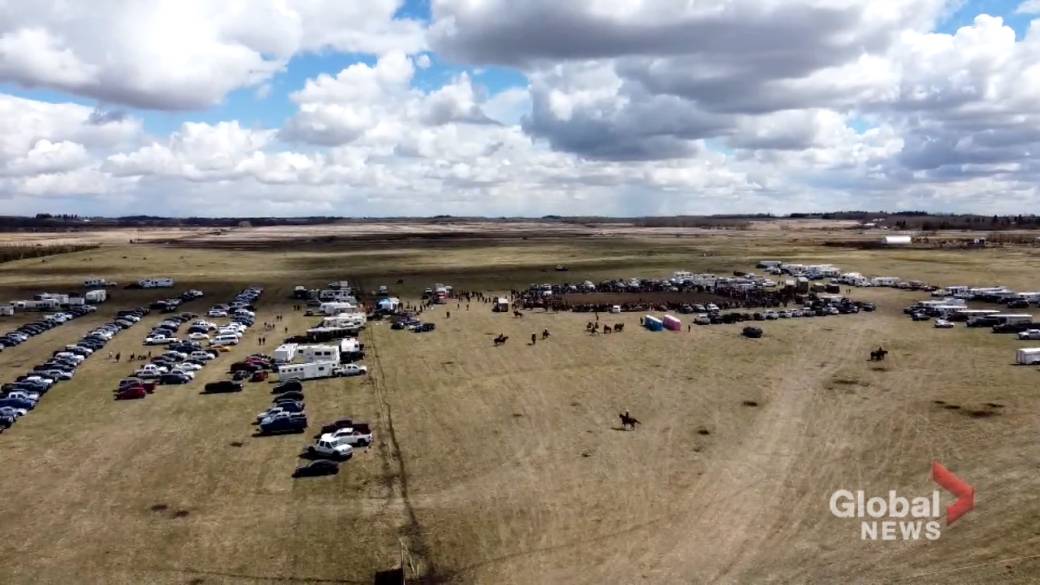 Kenney has repeatedly said recently that one of the biggest hurdles to getting COVID-19 under control in Alberta has been that too many people do not adhere to the public health restrictions already in place. On Tuesday, he announced his government would be “doubling the basic fine for violating public health orders from $1,000 to $2,000.”

“And we are introducing a tougher enforcement protocol for repeat offenders,” he said.

“We will not tolerate those who endanger the health of their fellow Albertans while the vast majority of people are doing the right thing.”

During a news conference about Alberta’s COVID-19 situation on Monday, Kenney said he expected to announce stronger restrictions soon.

On Tuesday, Alberta confirmed an additional 1,743 cases of COVID-19 as well as 876 new cases involving variants of concern. Variants of concern now make up at least 62.3 per cent of active cases.

Alberta Health Services has shifted away from screening all positive COVID-19 cases for variants of concern, instead targeting variant screening on populations at highest risk. 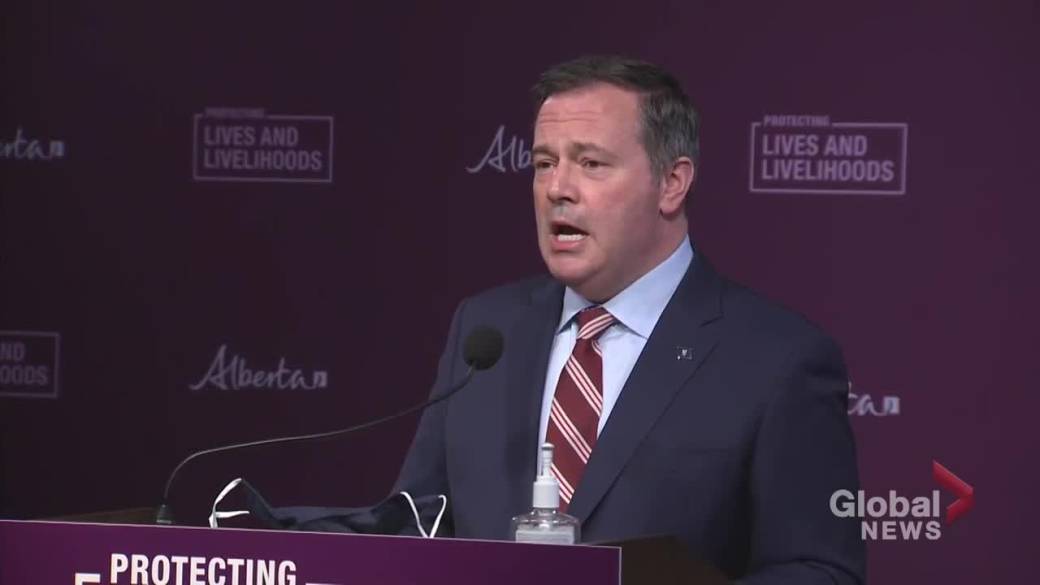 Nine more deaths due to COVID-19 were announced Tuesday.

In the Calgary zone, four deaths were reported and all had comorbidities: a man in his 80s, two men in their 70s and a man in his 60s.

Read more:
Alberta doctors say province heading to 300 COVID-19 patients in ICU by end of May

There were 671 Albertans hospitalized with COVID-19, with 150 of those people in the ICU.

“Take this seriously,” Kenney implored Albertans on Monday, as he suggested the health-care system could soon see its capacity overwhelmed if the province’s rise in coronavirus cases does not begin to flatten or decline.

Kenney said the conversation around possible restrictions was ongoing, but did not say on Monday what they would entail, but has repeatedly said “lockdowns” similar to what Toronto has done haven’t had the desired effect.

“We can have, on paper, the hardest lockdown imaginable, and if… a large share of the population isn’t following that, it doesn’t matter,” he said. 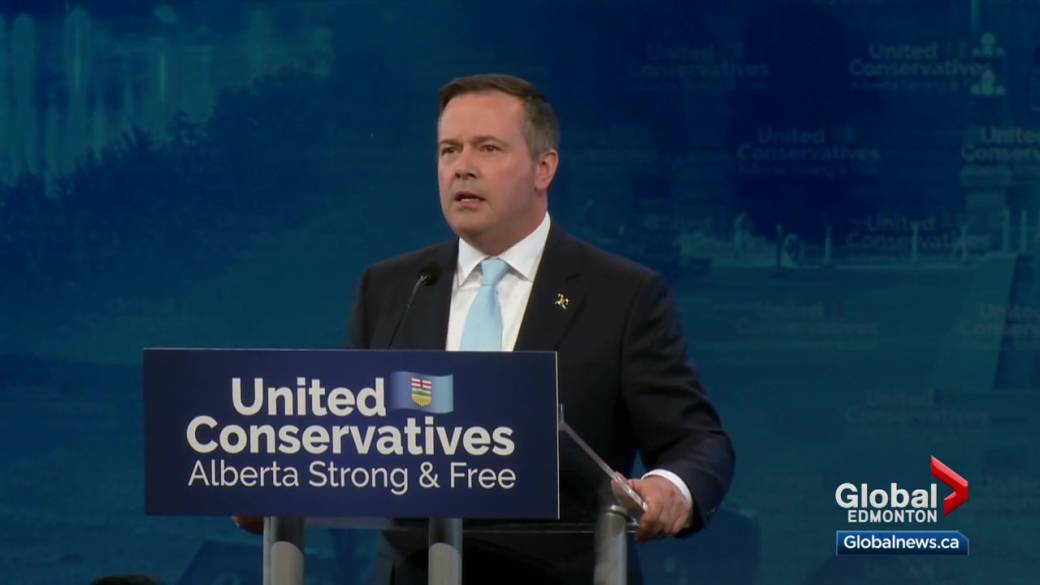 5:36
Politics and the pandemic: A closer look at Alberta Premier Jason Kenney’s handling of the COVID-19 crisis

Politics and the pandemic: A closer look at Alberta Premier Jason Kenney’s handling of the COVID-19 crisis

As well as the new cases announced on Monday, the province also confirmed an additional four COVID-related deaths. An additional 1,900 variants of concern were also identified, making up at least 63.8 per cent of active cases.

Alberta Health Services has shifted away from screening all positive COVID-19 cases for variants of concern, instead targeting variant screening on populations at highest risk.