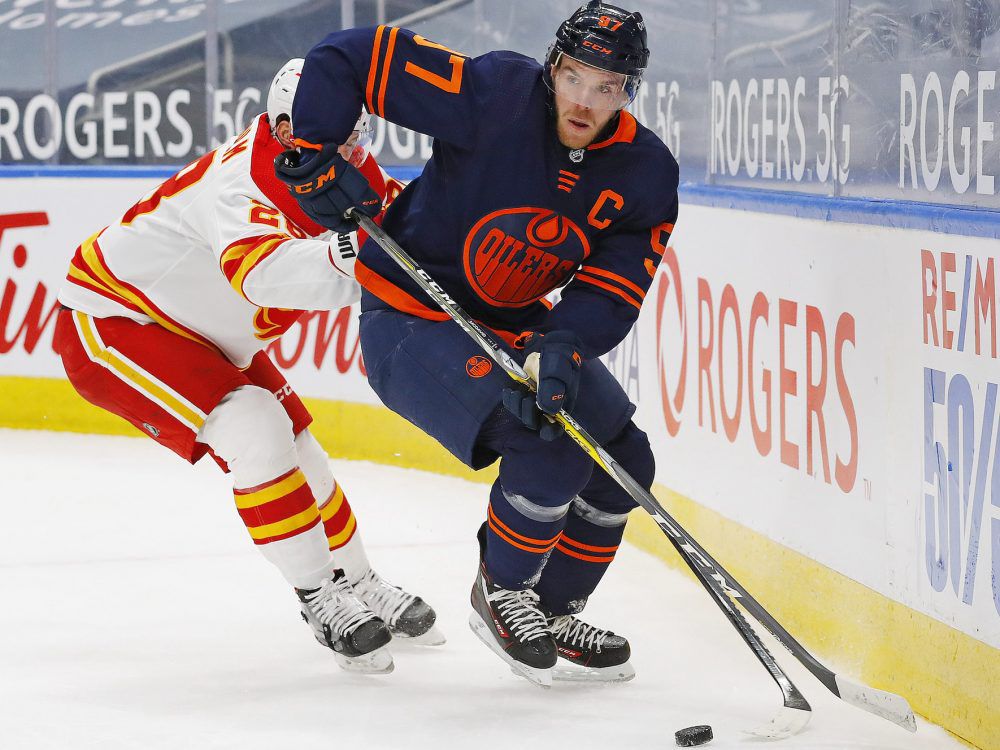 Asked on SN590 radio what separates Connor McDavid from Auston Matthews, Sportsnet’s Cassie Campbell-Pascall said, “I just think the offensive dynamic ability to skate with the puck is where Connor McDavid separates himself. Listen, there’s not a lot of separation there because I believe, this year, Matthews has actually surpassed McDavid just in the sense that I think he’s a little bit more complete. You know, a little bit different at faceoffs. You’re starting to see a complete game in Matthews. You’re starting to see a little more effort, a little more preciseness in back check, and defensive liabilities and things. I think Connor McDavid, his offensive —  I know Matthews has scored a ton of goals — but what he (McDavid) produces offensively for his teammates and for himself is off the charts, there’s no one even close, but I got to tell you I think Matthews’ game overall this year has been more complete than Connor McDavid’s. And I know that’s something that Connor McDavid came in, he wanted to be better at faceoffs, he wanted to be better at the defensive side of the game, and he’s made some strides. But I think Matthews has taken that side of his game to another level this year.”

1. Edmonton Oilers fans aren’t going to like this from Cassie Campbell-Pascall, not one bit. Having seen McDavid vs Matthews in four games this year, I’d suggest that both McDavid’s offensive and defensive games are better than what we see from Matthews. That said, I’ve seen every game this year from McDavid and just the four from Matthews. Maybe he’s been better in other games.

3. McDavid’s defensive game has never been better. He’s almost always on the right side of his man in the d-zone, between his check and the Oilers goalie. He’s covering well in the slot, making sure no one sneaks in behind him, as opposed to puck-watching, which he did all too often in previous seasons. He’s become solid fundamentally in the d-zone, and when he wins the puck there there’s no better NHLer to advance the puck up the ice, a key defensive attribute.

5. You’ll get some vague sense from using on-ice numbers for goals against, scoring chances against and shots against about the defensive play of an individual players, but those numbers don’t focus in on individual contributions like points do. You have to make a pass or a shot to get a point on a scoring play. But on a shot, scoring chance or goal against, you could be doing your job, covering your man, doing everything right, and you’ll still get a minus one if you’re out on the ice. Not only that, this happens all the time. False negatives are about as common as earned negatives. False negatives are constant in a game where a player makes no mistake on a shot, scoring chance or goal against yet is tagged with that -1. Feel free to put a lot of weight in that kind of analysis, but it’s going to often mislead you.

6. To rate defensive play, hockey analytics companies and NHL teams go over video and focus in on the individual acts of individual defenders. They keep detailed records. But these records aren’t available to the public.

8. McDavid’s two-way game has reached a new height. And if you want to check my work, go over all the video yourself. Here’s a chart showing all scoring chances for and against the Oilers, and exactly what we at the Cult think McDavid did right and wrong. It’s through this work that I make my claim about McDavid’s two-way game reaching a new height. As for Matthews, I can’t speak to his defensive game. Maybe he really has become a monster defender. McDavid is certainly moving in that direction himself.

9. It could be that Campbel-Pascall does her own detailed scoring chance work and that she does so for both the Leafs and the Oilers. Or maybe she has access to private stats in this regard. Or maybe she has some other system to break down fairly and accurately the defensive contributions of both McDavid and Matthews. Or she could be going on her own acute vision of each player and maybe she’s even seen all of their games this year. I can’t make that claim with Matthews, as I haven’t seen him enough to fairly and accurately assess his defensive game. I would just be guessing. But I’m not guessing when I tell you that McMVP has been kicking butt both on the attack and on defence.