Should all seniors get the COVID-19 vaccine before essential workers?

With access to COVID-19 vaccines slowly expanding across Canada, some experts are emphasizing that age should be the main priority, even over some essential workers.

The director of geriatrics at Sinai Health System in Toronto, Dr. Samir Sinha, says that regardless of if the goal is to prevent deaths, lessen the strain on the health-care system or reopen the economy, the approach should be the same: vaccinate seniors first.

Read more: Coronavirus vaccine tracker — How many Canadians are vaccinated against COVID-19?

“So we should keep on with the approach of prioritizing 80-year-olds first,” the University of Waterloo professor said.

“If we could vaccinate enough people per week, then we could probably prevent more deaths by distributing the vaccine, dispersing it widely to all age groups — so a non-targeted strategy. But at this point in the pandemic, for that to work would require us to be able to vaccinate more than five per cent of the population per week.”

As of Feb. 22, only two per cent of Canada’s population has been vaccinated since the first doses were administered in mid-December, calculated by counting every two vaccine doses as one vaccination.

Bauch added that the threat of the B.1.1.7 variant, which was first discovered in the U.K., actually strengthens the case for an age-based approach “because it’s much harder to for the vaccine to block transmission if the virus is more transmissible.”

“That strategy of blocking transmission can work, but it only works if you’ve got a kind of critical mass of vaccinated people. And at the current rates of vaccination, we’re not at that point.”

Sinha said that in early January, Ontario’s initial plan had non-health-care essential workers like teachers in queue ahead of older people not receiving publicly funded home care or living in long-term care or retirement homes.

“A 90-year-old living in the community is at far greater risk, for example, than, say, an essential worker,” he said.

“It really didn’t make much sense and so I think this is where NACI (National Advisory Committee on Immunization) has stepped in, releasing clear guidance saying essential workers absolutely should get vaccinated, but they shouldn’t be a top priority, they should be a second priority in a three-phased approach.”

Sinha says the initial plan also had “so many different populations being included that actually created competing priorities” in Phase 1.

“It meant that we were actually seeing workers in hospital who aren’t actually high-risk front-line workers getting vaccinated. And then we were seeing that our ability to vaccinate the most vulnerable among us, those living in our long-term care and retirement homes, were not getting vaccinated in a timely way.”

Sinha pointed to a recent report from the Ontario COVID-19 Science Advisory Table that found that delaying vaccinations at long-term care homes cost over 100 lives in Ontario.

The independent group, which helps inform the province’s response, released a report on Jan. 21 claiming that if all long-term care residents had received their first doses of vaccine by Jan. 31 instead of by Feb. 15, then 115 deaths would have been prevented in the province by March 31.

In cases where vaccine supply is limited, the researchers argued that it would be better to provide first doses to long-term care home residents than to provide on-schedule second doses to health-care workers outside of those homes.

Sinha has been vaccinated, but he stressed that he provides front-line care in high-risk settings.

“That’s why my vaccination was absolutely justified. But if there was only one vaccine available and it was my 98-year-old patient who lives at home versus me as a 44-year-old healthy young health-care professional, I would say that vaccine absolutely should go to that individual first.” 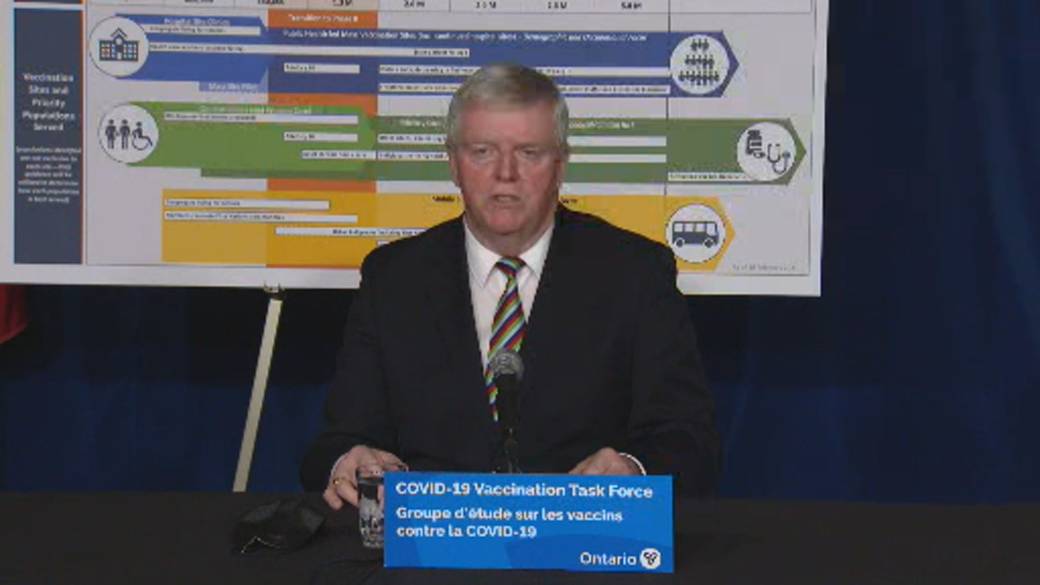 0:55Coronavirus: Ontario aiming to vaccine people in age group 80 or older in mid-March

Coronavirus: Ontario aiming to vaccine people in age group 80 or older in mid-March

On Friday, retired Gen. Rick Hillier said that the Ontario vaccine task force is aiming to start vaccinating people in the age group of 80 or older by mid-March, and will start reaching out to people soon.

Just days earlier, officials in Manitoba said shots for people 95 and older were expected to begin this week.

In Alberta, meanwhile, those born in 1946 or earlier can book an appointment starting on Feb. 24.

Information on provincial and territorial vaccination rollout plans can be found through the government of Canada’s vaccine rollout webpage.

Read more: Canada to receive over 640,000 vaccine doses from Pfizer, Moderna this week

On that webpage, last modified Feb. 18, the government of Canada has outlined, based on NACI recommendations, that adults age 70 and older should be among the highest-priority group for early vaccination — before essential workers outside of health care — in addition to front-line health-care workers in direct contact with patients, adults in Indigenous communities, and residents and staff in shared-living settings who provide care for seniors.

After that, it says vaccinations should be offered to more groups including adults 60 to 69 years of age, to first responders like police and firefighters, to front-line essential workers like grocery store staff and transportation workers, and to other priority groups.

Bauch says once the most vulnerable groups are protected, then vaccination can expand to those who have more contacts.

“So, for example, if you work in a restaurant or at a grocery store where by the nature of your job you just have to be in contact with people, they should be the next ones to get the vaccine. And then people like me who work from home, unfortunately, we have to go to the end of the line and we should be the last vaccinated because we can prevent our contacts more easily.”