The curious case of Tyson Barrie

Out of the frying pan and into the fire for Edmonton Oilers, currently in the toughest part of their schedule. The Oilers return home from a 1-2-0 road trip to Vancouver and Calgary to play their 5th game in 7 days against the tough Winnipeg Jets. It’s the first of 7 straight games against the other “playoff teams” in the North Division over the next 12 days. Overall make it 11 games in 18 days, a taxing slate to say the least.

After a pair of excruciating one-goal losses to open their most recent trip, both games that saw the Oilers pressing for the equalizer right to the last second, the squad took care of business a little earlier in Calgary last night. The visitors scored early and often, jumping to a 2-goal lead in the first 8 minutes, a margin that only grew as the night went on. A quartet of goals in the first half of the third period put the game away, allowing coach Dave Tippett to roll his lines and pairings, which themselves rolled to a 7-3 win.

Not a single forward played as much as 20 minutes on the night, while the even strength ice time was stacked between Jesse Puljujarvi‘s 11:03 and Zack Kassian‘s 14:23.  Similar oin the back end, where Adam Larsson led the way with a relatively modest 22:39 including a team high 21:12 at even strength. Larsson took a couple of extra shifts with Darnell Nurse, whose regular partner Tyson Barrie played sparingly down the stretch. Barrie had been a doubtful starter after leaving Monday’s 4-3 loss in Calgary after the first period with an undisclosed injury.

Barrie played just 18:13 on the night, well below his season average of nearly 22 minutes, but he sure made those minutes count. He assisted on Edmonton’s second, third, fourth and fifth goals of the night, raising his status from “doubtful starter” to “second star” in a highly enjoyable beatdown of the Flames.

In the process Barrie became just the third Oilers defenceman in the last dozen seasons to record four points in a game, and the first since Oscar Klefbom also posted 0-4-4 in 2016-17. Justin Schultz also had a four-point outing as a rookie in 2013. Let’s call it a rare feat, at least for an Oiler.

Here’s another item that can be filed in the same category of “rare feat”. After games of last night, Tyson Barrie ranked #1 in the NHL for points by a defenceman. 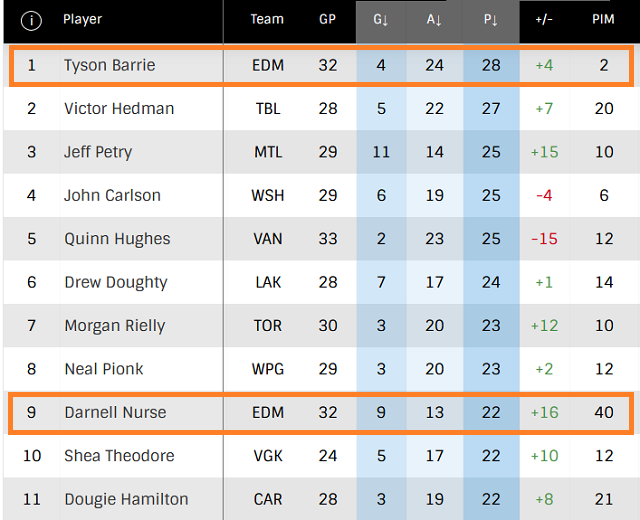 Been a long time since an Edmonton Oiler was atop that list at any point of a season. I’m thinking Paul Coffey in 1985-86.

Not that anyone will mistake Tyson Barrie for Paul Coffey. But what can’t be denied is that the man brought in to provide offence from the back end has been doing just that.  Indeed, entering action tonight Oilers fans can delight in a team that leads the NHL in goals; that sports the top two scorers in Connor McDavid and Leon Draisaitl; and that has the top-scoring rearguard in Barrie. Worth noting also that Darnell Nurse leads all blueliners in both goals (9) and points (18) at even strength. Temper all that somewhat with the current disparity in Games Played, but the fact remains that the Oilers have a high-octane offence.

To this point Barrie has played an important part in that emergence. And he’s certainly been warming up as the season has gone along. 32 games in, let’s break his output into four blocks of 8 games each:

No question Barrie got off to a slow start in Edmonton, scoring sparingly at first as the powerplay sputtered. He was a minus player in 8 of his first 10 games (-1 in each, even in the other 2). Then Ethan Bear went down in a freak incident, and Barrie got the push on to the top pairing with Darnell Nurse. The pair clicked immediately, and commenced outscoring the opposition on a regular basis. Barrie has had just 2 minus games in his last 22, posting a net +12 in that span.

The curious reader is forgiven for wondering “how is that even possible?” given identified weaknesses in the player’s defensive game that were well-known before he ever arrived in Edmonton. He does not have a history of being an outscorer, but he sure has been one since the calendar turned to February, and even more so in March. He is piling in the points at both even strength and on the powerplay with 2-12-14 in each discipline, equally splitting his production in each of the four 8-game blocks identified above.

Without taking too deep a dive into underlying numbers, I did determine Barrie’s on-ice shot shares at 5v5 for each of the four blocks, which show a steady and encouraging rise. Overall he’s been break-even in that respect, his 49.8% exactly mirroring that of the team as a whole. His expected goals of 49.6% is scarcely different. The key factor being that the Oilers have “plus” shooting talent, and when your three most common teammates are Nurse (362 minutes), McDavid (279) and Draisaitl (222) it stands to reason that more of your passes will be turned into assists. It follows that at 5v5 Barrie is running a positive PDO of 1.016, a notch higher than that of the team as a whole at 1.008.

All of which has many Oilers fans somehow distressed. Might Barrie’s production mean the team might re-sign him, perhaps moving on from a local favourite like Evan Bouchard, Ethan Bear or Caleb Jones? All of those youngsters have been bubbling under for some years now, and each has shown plenty of promise. Of them, Bouchard is the closest match for Barrie’s skill set, both strengths and weaknesses. He played 12 games this year, mostly while Bear was out, compiling the same 4 points that Barrie recorded last night alone. Meanwhile, the “Bobbsey Twins” Bear and Jones have combined to score 4 points, in 36 games.

Yes of course that is apples and oranges, the opportunities afforded each player are vastly different. Barrie is the one getting the “cherry minutes” on the top paring, playing with (and against) the best forwards. But the fact is that he is producing in the here and now.

And the good news is, Barrie is under contract only for the here and now, for just the current season at a very reasonable $3.75 million. It remains distinctly possible that this will be a one-season stop, with the ten-year vet (correctly) having identified Edmonton as a market where he can raise his profile and his bargaining power. In the meantime, he’s filling a significant part of an Oscar Klefbom-sized hole on the back end, for 90% of the cost. Not a bad band-aid for a year.

But will it be just the one year? Colleague David Staples explored the possibility of a contract extension just yesterday, so I won’t revisit it here other than to update the player’s own comments in a post-game interview after the beatdown of the Flames. According to Barrie himself, no negotiations have even begun, and his sole focus is on putting together as good a season as possible both personally and as a team.

Seems like a good thing to be focusing on to this Oilers fan, who chooses to nod approvingly at the short-term deal Barrie did sign with the team rather than wring my hands in trepidation about what Ken Holland might do next. Let’s see how the season plays out, what Klefbom’s prognosis is, how the youngsters continue to develop, and let the chips fall where they may.

…has not been confirmed, other than Mikko Koskinen will get the start in goal. Coach Dave Tippett made his typical game-day comments about monitoring a couple of injuries, and TSN’s Ryan Rishaug put some meat on those bones when he noted on Twitter that both Joakim Nygard and Caleb Jones had a short morning skate, frequently a clue that Black Aces may be finding their way into the line-up.

The Jets, who beat Montreal 4-3 in overtime in Winnipeg last night, are also expected to roll out their backup goalie in former Oiler Laurent Brossoit. The two teams have split a pair of highly competitive two-game sets to this point, one in each city. All were one-goal games decided in regulation, with one empty netter giving the Jets a 17-16 advantage in goals. Both these teams can put the biscuit in the basket so fans can expect another entertaining affair. Game time is 7pm MDT.

STAPLES: What is Tyson Barrie worth to the Oilers on a new deal?

"I get messages from people all over Edmonton, Mill Woods all the time telling me that they're excited for me to come home, and...
Read more

The best thing Ken Holland could do for the Edmonton Oilers is “slow it down”: 9 Things