The Edmonton Oilers will always be able to score goals. Lately, they've done way better at preventing them.

It’s just two months ago today that the puck dropped on the abbreviated 2021 NHL season, and already Edmonton Oilers are in the second half of their 56-game slate with the pace of games intensifying. Last night’s 6-2 home win over the Ottawa Senators kicked off a brutal run of 11 games in 18 days, with no more than one day off between games and no fewer than three back-to-backs in that short span, all of them involving travel between the two games. Eight of the next ten will be on the road, and none of them will feature the Senators upon whom the Oil have feasted.

First test is tonight in Vancouver, where the Oilers arrived in the wee hours this morning. They’ll face a relatively rested band of Canucks, who faced their own absolutely brutal run of games earlier in the season and paid a heavy price. By the time the Edmonton swept a pair of games on the west coast n late February, they’d played 24 games in 44 days and their record had fallen to 8-14-2. Three days off ensued, and since then the ‘nucks have posted a solid 4-2-0 record. A 5-1 home loss to Montreal in their most recent outing on Wednesday will ensure they’ll be in a snarky mood tonight, and the two days off since that contest should mean they are relatively fresh. The visitors need to be prepared for a strong showing from the home side, who no doubt are still smarting from that sweep a couple of weeks ago.

The Oilers will be looking to extend their superb record in back-to-back games. Since Mike Smith and Mikko Koskinen became the tandem at the start of the 2019-20 season, Edmonton has posted an other-worldly 11-1-0 mark in the second game of back-to-backs, including 4-0-0 in the current season.

Only once in that span has the same netminder played both games of a back-to-back set. They were Games 1 and 2 in 2021, both against Vancouver, when Koskinen was forced to do double duty after Smith was injured in warm-up of Game 1. That ominous start to the season was met by a predictable volley of criticism about the folly of signing a 38-year-old goalie in the first place.

For sure the Oilers were in tough during the 13 games that Smith was unavailable, especially given the ongoing circus that surrounded the #3 position, one that may have finally been solved with the claim of veteran Alex Stalock off the waiver wire a fortnight ago. Stalock is a ways off yet as he has to clear COVID protocols.

That said, the key addition to the roster was definitively the return to action of Smith, who finally saw game action in Game 14 in Ottawa. Until then Koskinen had played 12 of 13 and visibly struggled under the burden. Youngster Stuart Skinner played one game, an 8-5 win over the Senators in Edmonton’s second back-to-back of the young season.

Then Smith came back and all of a sudden the Oilers looked like a different team. Especially on the defensive side of the game.

Interesting to note that while the Oilers points percentage improved from .462 to .750, their offensive output has actually dropped by a quarter of a goal a game. But that’s been way more than offset by massive improvements at the other end, where they’ve slashed a goal and a half per game off their earlier pace.

Smith looked sharp right from the get-go, backstopping the Oil to a 3-1 win in his season debut. The next night, Koskinen delivered 40 saves in a 3-2 squeaker and the two-goalie system was back.

It has seemed more like a one-goalie system at times, as coach Dave Tippett has been riding an extended run of strong play from Smith. He started 12 of those 16 games, though I’d argue 12 out of 16 is a heckuva lost different from 12 in 13. Koskinen has drawn in every few games to give the older man a breather, and with one notable exception, delivered in spades. Koskinen won 3-2 in Ottawa, 3-2 over Winnipeg, 3-2 over Ottawa. His one failed start was a 3-0 loss to Toronto. In all he got 9 goals of support through those 4 starts, but managed to win 3 of them. All in regulation, too.

Look at all those scores and you’ll see that the Oilers gave up 2 or fewer goals in 11 of their 12 wins in that five-week span. Just once, when Smith was beaten for 3 in the first period in Vancouver, did the team need a fourth goal to win, and that night they had their stopper’s back with a stirring third-period comeback. Only in the last two games, both vs. Ottawa, did the club fill the net at the other end.

Indeed, since Smith returned the Oilers have given up more goals in their 4 losses (19) than they did in their 12 wins (17).  On those nights that the Oilers are able to mind the store at their own end of the ice, they’ve done very well indeed. Thankfully such nights have been in the vast majority.

Overall, their defensive results have been a more important factor than offensive, as this chart suggests: 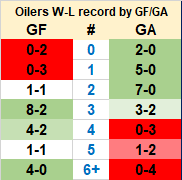 In a league averaging around 3 goals per team-game, a rule of thumb is that 4+ Goals For  “should” be enough to win, as “should” 2 or fewer Goals Against. Three times, however, the Oilers scored 4 or more goals only to lose, allowing 6 each time. But when they have held the other side to 2 or fewer, they are unbeaten and untied. Make it a perfect 14-0-0, every single one of those wins in regulation.

(That last, remarkable fact should be rewarded in the standings to a greater degree than the NHL Cockamamie Points System™ permits. The club has played just one overtime game all season, meaning an average Oilers game has been valued at just 2.03 standings points, compared to 2.27 points per game for the rival Montreal Canadiens. Indeed, both teams have seen exactly 59 points awarded in their games to date, yet somehow the Habs have 3 games in hand.)

That rant notwithstanding, winning in regulation is always the best possible result. The Oilers have been doing a lot of just that, with defensive outcomes seeming to be the major driver.

Several items driving that improvement, with goaltending being the leading but far from the only factor.

Those are a few key names from what could be an extended essay on team-wide improvement. I would make the general case that the entire group has bought into a more conservative game plan after the early run-and-gun game didn’t pay dividends. For sure Dave Tippett’s club has gotten much better at overall game management, especially when in the lead or tied. As the coach said in today’s game-day avail, the key to success in back-to-back games in particular is “hang around and find a way to win”, a trait his Arizona Coyotes teams used to display on a distressingly regular basis.

Still, not all fans are convinced that the Oilers goaltending isn’t a weakness, possibly even a major one. Nearly half of all respondents to my colleague David Staples’ recent poll identified a top goalie as Ken Holland’s priority acquisition at the upcoming trade deadline. The addition of Stalock the same day as the poll was taken may have changed the equation some, but the talk is still out there.

What is the #Oilers top priority at the coming trade deadline?

My own take is that Holland made his bed with Koskinen and Smith the day he re-signed the latter to a one-year extension, which at this singular moment in time looks like a terrific bargain. The GM encountered some troubles finding, and keeping, a reliable #3, but has now finally resolved that problem. And it’s pretty hard to imagine he’s currently dissatisfied with the quality of play he’s getting from both of his main men.

RELATED: In Search Of… the method to Ken Holland’s madness re: Edmonton Oilers’ goaltending

But stay tuned, as the coming weeks with the intense scheduling will put more pressure on the masked men. Holland still has a month to change his mind and try to deal for “a top goalie”. But this observer for one would be pretty surprised to see it. 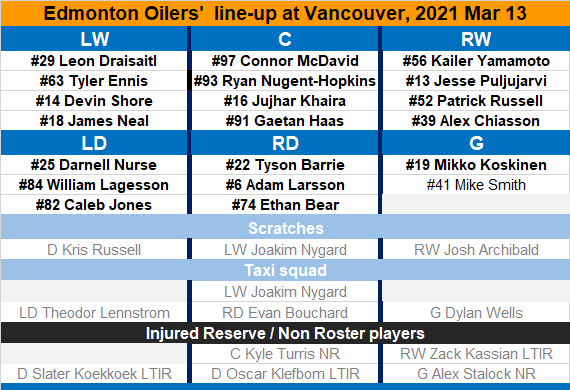 The bottom section of our game day roster is growing ever more complicated, with a couple of “non roster” players added to the mix, as both Stalock and Kyle Turris are under COVID protocols.

In his game day avail, Coach Tippett made his usual comments about player availability, issuing a vague “there’s a couple of injuries we’re monitoring” without any specifics. So we will default here to the identical lines and pairings as toppled Ottawa last night.

The coach outlined one definitive change, confirming Koskinen will get the start and Smith the night off, exactly as expected. The Oilers’ two-goalie system is going to be on full display this next while, and remains a key to their ongoing success.

STAPLES: Rise of the Whipping Boys, Smith, Russell and Khaira

McCURDY: Big line of Benson, McLeod and Marody crushing it on farm