Goaltending has cost the Oilers about three wins this year

There’s one big reason why the Edmonton Oilers haven’t won more games this year, and all the rest is chit chat.

We faithful fans of the team are constantly ablaze over team performance. Debates boil up hourly and long reports come out each day on every decision the coach makes on Oilers forwards and d-men, along with in-depth summaries on the pros and cons of each player.

Simply put, Edmonton’s goalies have made significantly fewer big saves this year than have the goalies of their opponents.

If I were to put a number of how many wins this has cost the Oilers, I’d say it’s about three wins in 17 games.

The Grade A scoring chances gap

How can I put so much on the Oilers goaltenders? Because in most games the Oilers significantly out chance the opposition, but their won-loss record doesn’t reflect that dominance.

Overall, the Oilers have averaged 13.2 Grade A scoring chances per game but have given up just 10.4 Grade A chances.

That’s a huge positive differential for the Oilers.

The Oilers have a Grade A Scoring Chances For percentage of 55.9 per cent.

Yet when it comes to scoring goals, Edmonton has scored 3.53 per game but given up 3.41 per game. That’s a Goals For percentage of just 50.9 per cent. Very tight. Very close. Not much of an edge for the Oilers.

Monday’s 6-5 loss to the Winnipeg Jets was the kind of defeat that has been all too common for the Oilers, a game where their goalie(s) were the second best on the ice, even as the Oilers were the more dangerous attacking team.

Starting goalie Mike Smith was beat on four difficult shots, not one of them an easy save to make, but he let in every single one of the difficult shots he faced before he was pulled in the second period. He failed to make those two or three big saves that are often the difference between winning and losing a game.

At the other end, Winnipeg goalie Connor Hellebuyck wasn’t perfect, but he came up with the huge saves, such as him blocking a wicked Ryan Nugent-Hopkins’ one-timer off a Leon Draisaitl power play feed late in the second period.

It was the fourth time an opposition goalie stole a win for his team against the Oilers this year in such a game where Edmonton had significantly more Grade A scoring chances.

Meanwhile, in 17 games this year, Oilers goalies have only stolen one game, Smith last week in Edmonton’s 3-2 win over Ottawa.

To understand this in more detail, let’s dig into the three types of games the Oilers have had this year.

In these three games, the Oilers had the same number of scoring chances, or were within one scoring chance, as the opposition team. Edmonton lost to Montreal 5-1 in a game where both teams had 14 Grade A chances, they lost to the Leafs 4-3 when the chances were Oilers 14, Leafs 13, and they beat the Senators 4-2 in a game where each team had seven chances.

In each of these three games, the opposition had two or more Grade A chances than the Oilers. The Oilers earned one win and two losses in these contests. In Edmonton’s recent 3-2 road win over the Ottawa Senators last week, Smith’s first game back, he stole a win for his team. Ottawa had 13 Grade A chances that game, the Oilers only nine. The Oilers lost the other two games 6-4 to the Jets and 3-1 to the Habs.

In those four games, opposition goalies Braden Holtby, Frederik Andersen, Jacob Markstrom and Connor Hellebuyck arguably stole games. In total, the Oilers had 67 Grade A chances and 14 goals, while the opposing teams had 51 chances and 21 goals.

If there’s any good news it’s that Mikko Koskinen was much better last season, and can maybe be expected to return to form with Smith’s return, now that Koskinen isn’t forced to play almost every game.

Smith is also off to a hot start, even with his iffy performance against Winnipeg. Koskinen can get his save percentage to move north of .900, the Oilers should make the playoffs, given the otherwise strong performance of the team. 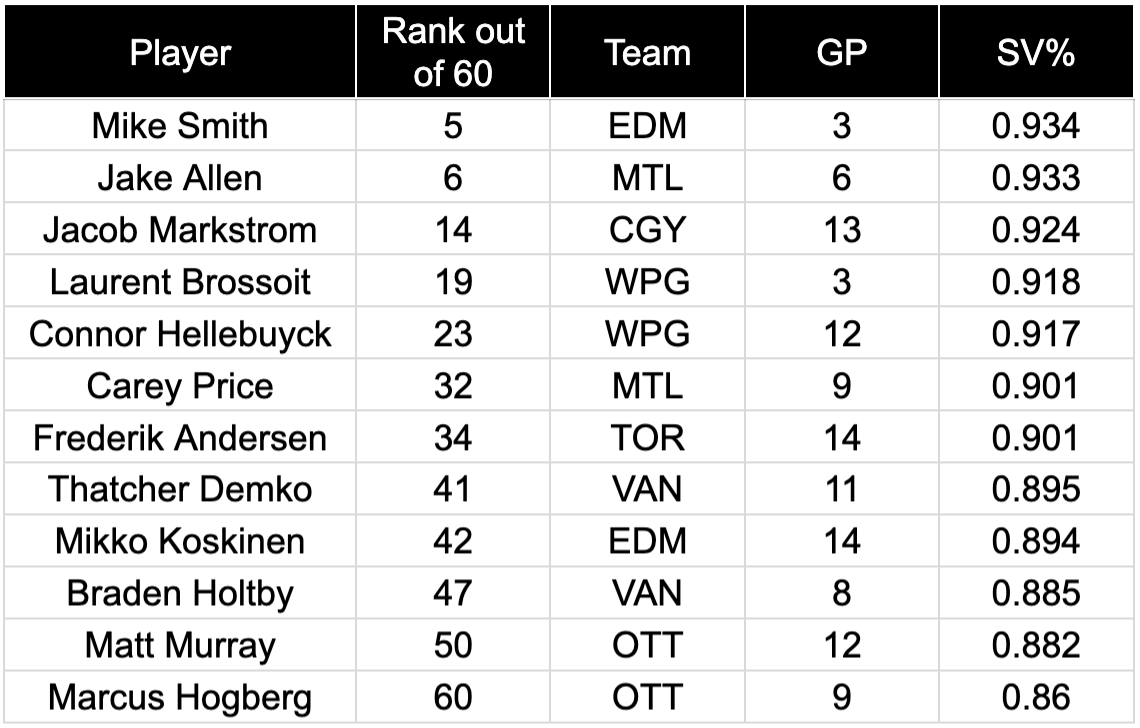