The Edmonton Oilers are home and cooled out in second place in the NHL’s Scotia North Division, 6 points behind first-place Toronto, 7 up on third-place Winnipeg in the dwindling days of the 2021 season.

While the playoffs will ultimately determine how Oil fans look back on this one-of-a-kind campaign, it’s not premature to consider the regular season to have been a resounding success. After an iffy 3-6-0 start, the Oilers have gone on an extended tear to raise their overall record to an impressive 32-17-2. That’s a .647 points percentage, which would stand as the organization’s best since they won the Presidents’ Trophy in 1986-87 with a .663 mark. Different points systems to be sure, but the Oilers have won 30 of their 32 games in regulation, and have padded their totals with just 2 Bettman Points this season. Not a single game to this late point has reached the shootout.

How have they done it? By avoiding extended losing streaks, and by tightening up at the defensive end to the point that on many nights Connor McDavid has been able to personally outscore the entire other team. And lest we forget, by beating up on the Ottawa Senators. Let’s dig a little deeper into all three:

The 2019-20 Oilers distinguished themselves from previous teams of the McDavid Era through their ability to avoid lengthy slides. After the pause (and what turned out to be regular season’s end) we wrote this post noting how the club had only one losing skid longer than 2 games all season long. In particular, they had gone 9-1-0 in the third game after losing 2 in a row, with the single exception being a 4-game slide in December.

In 2021 that has improved further still. While everyone will remember the club’s one and only 3-game losing streak — a disastrous home series against Toronto — they rebounded strongly from that. Just three other times have they lost as many as 2 in a row, with two of those mini-slides occurring in January. Overall, the squad has posted a 14-5-0 mark following any loss. That’s a sign of a strong club.

Here’s an update of the table posted in the cited post:

A glance at the column at far right confirms that since the arrival of Dave Tippett in 2019, extended losing streaks have largely become a thing of the past. 122 games in, Tippett’s Oilers have had just two losing streaks as long as 3 games and none more than 4.

On the other side of the ledger, in the current season the Oil have recorded six winning streaks of 3 games or longer, compared to just 5 times all season a potential run was stopped after just a single victory. Overall the squad has recorded an 18-11-2 mark in games following a win. That too is the sign of a good hockey club.

While I would push back hard against the notion the Oilers are a one-man team, it is nonetheless extraordinary the degree that McDavid has pushed the offensive output. He has produced 93 points on the club’s 167 goals, meaning he’s been involved in a remarkable 56% of scoring plays.

His impact has only continued to rise as the season goes on. Zeroing in on the last 12 games, the Oilers have scored 40 goals, with McDavid chipping in on 29 of them (72.5%). Over that span — a full calendar month — McDavid’s personal output dwarfed that of the opposing teams, who combined to score just 23 goals in that time.

The Oilers have recorded a splendid 9-3-0 mark in those games, a deserved record based on that +17 goal differential. The funny part is that if the Oilers had not scored a single goal outside of those directly involving McD, they still had enough offence to win 8 of those games outright and take the 9th to overtime. Look at the two right-most columns below: 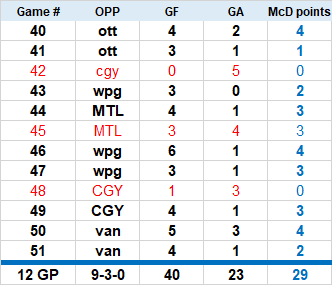 Ridiculous. McDavid has averaged 2.42 points per game since Apr 06, while his team has held opponents to an average of just 1.92 goals per GP. That’s in all games, wins and losses both. In the 9 wins, the combined “score” is McDavid 26, Opponents 11.

Over the season as a whole, McDavid has “outscored” Edmonton’s opposition in 16 of their 32 wins and broken even in another 11. Overall #97 has produced 76 points in Edmonton’s 32 wins (2.38 P/GP), while the opposing team has combined for just 54 goals (1.69 G/GP). Obviously other players were involved in most of those scoring plays involving #97, and the entire team deserves credit for the strong defensive record. But there can be no doubt about which Oiler is driving the bus.

Edmonton’s impact on the North Division

Much has been made of the Oilers’ 9-0-0 record vs. the “weak sister” Ottawa Senators in 2021, with both McDavid and Leon Draisaitl running roughshod with 21 points apiece while the Senators scored a combined 18 goals. Indeed, in the final 8 of those games the Senators were held to 2 goals or fewer. In the eyes of some, those results somehow delegitimize the overall performance of the Oilers and by extension, their star player.

But this just in: other than their inability to win against the Oilers, the Sens are not a weak sister by any reasonable definition. They’ve beaten every other team in the North at least three times, and lost a few others in gimmick time. Take away their 0-9-0 record vs. Edmonton and the Senators have posted a very respectable 21-18-5 mark against the rest of the North.

In fact, if one removes all Oilers games from the equation, Ottawa ranks surprisingly high among the other six Canadian teams:

Third place! Take heart, Sens fans. Your promising young team won’t have to face their nemesis nearly as often in the years to come.

At this morning’s avail, Tippett indicated this would be the last game for “roster fluctuations”, indicating that the club will be going with a more set line-up in the four games that remain. “We’re not gonna sit here and just rest guys.”

Four players who got a one-game cameo in Vancouver on Tuesday will sit out tonight, the most controversial of those decisions likely involving promising Evan Bouchard who scored a splendid goal in his first game in over two months. But he and William Lagesson find themselves back in the press box, while Caleb Jones and Ethan Bear return on the third pairing.

Up front Tyler Ennis and Kyle Turris will also come back out, replaced by James Neal and Patrick Russell who last played back on Mar 13. The top six forwards and top four defencemen remain unchanged, while Mikko Koskinen will be the starting goalie.

On the injury front, Kris Russell hasn’t skated since being boarded by Matthew Tkachuk a week ago. Slater Koekkoek will be re-evaulated in 7-10 days, meaning he is extremely unlikely to play before the end of the regular season on May 15. Zack Kassian is skating on his own, on schedule, but on Long Term Injured Reserve through the season finale. Whether he will be ready for the start of the playoffs is unknown. No updates on Devin Shore and Gaetan Haas, both of whom remain out of the line-up after getting nicked up recently.

The Canucks face a daunting schedule that will see them play 9 times in the next 14 days to wrap up their COVID-ruined season, with 3 of those games slated right here in Edmonton. Tonight the visitors will reportedly ice the identical line-up that lost 4-1 to the Oilers in Vancouver on Tuesday, including the same starting netminder Thatcher Demko. Game time is 7pm MDT.

STAPLES: Why the Oilers are a solid playoff pick

STAPLES: Jujhar Khaira draws back in after concussion concerns

Previous articleThree to See Friday: Baby Boy, painted flowers and NWF noir
Next articleEdmonton places of worship look to online services after province caps capacity at 15 people due to COVID-19