More than 27 months have passed since Evan Bouchard has played an NHL game. It was October of 2018, with the recently-drafted Bouchard having been given a shot to make the jump directly to the NHL in oh-so-Oilers fashion. He scored his first NHL goal that night, but was soon optioned back to London of the OHL with 7 NHL games under his belt.

It’s been a long and winding road for “Old Man” Bouchard since then. Three times identified as the Edmonton Oilers top prospect in our annual Cult of Hockey series, he has moved about from London to Team Canada to Bakersfield to Sodertalje to the Oilers’ taxi squad. He even got a brief call-up to the big club last season, but watched from the press box without getting a game.

That’s about to change. Bouchard will draw into the line-up tonight as the Oilers host the Ottawa Senators in the nightcap of a two-game series.

No surer sign than a player leading the game-day stretch! Bouchard will apparently draw in beside veteran Kris Russell, though with the Oilers apparently set to dress 7 defencemen and just 11 forwards the D pairings are far from settled.

RELATED: Tippett on Bouchard: “We’re going to get him in pretty soon”

The Oilers will also mix up their bottom five forwards yet again as Tippett searches for solutions. 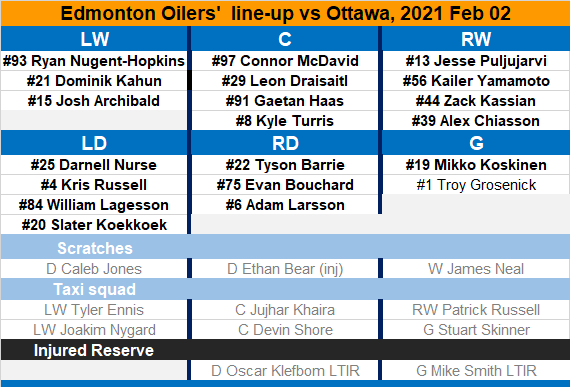 As confirmed by Oilers’ play by play man Jack Michaels.

Alex Chiasson has cleared waivers and remains in the line-up after playing easily his best game of the young season last time. Meanwhile, veteran winger James Neal is getting a night off after an early rush of 6 games in 10 days. A bit of a surprise after Neal scored his first two goals of the season on Sunday.

James Neal doing a lot extra work after the skate today. Gassing the legs. Looks to be out, based on how hard he’s pushing it. Perhaps 7 D tonight. pic.twitter.com/XHG6YG81RO

Gaetan Haas gets the push to 3C, and will centre Josh Archibald and Zack Kassian. Chiasson and struggling pivot Kyle Turris are set to be the 10th and 11th forwards.

On the back end Ethan Bear remains out after getting beaned by a stray puck on Saturday night, while Caleb Jones will join him in the press box after a tough night on Sunday. Slater Koekkoek draws back in as the nominal seventh defenceman. With the odd numbers at both forward and defence it will be interesting to see how Tippett juggles his lines and pairings.

Mikko Koskinen returns to the crease, while Sunday starter Stuart Skinner has been assigned to the taxi squad, where he will join five veteran forwards.

Recently-acquired Troy Grosenick will dress as the backup tendy. Despite a roster decision that seemed like a “head scratcher” (my words) at the time, it turns out the Oilers had been obliged to activate Grosenick by Saturday, thus Ken Holland’s pas de trois in the cord cottage over the weekend. Stick tap to Jason Gregor of TSN 1260 for setting me straight. Suffice to say that recently-revised roster rules involving waivers, COVID, taxi squads and more are not always immediately apparent to us outsiders.

Meanwhile, at the top of the line-up, Tippett has no reason to change a thing. The top six will remain as is, with superstar centres Connor McDavid and Leon Draisaitl each on a major roll. Both have scored 2 or more points in their last five straight games, and upped the ante over the weekend with 8 points apiece in 2 games. They were today named as the NHL’s second and third Stars of the Week, with Vancouver netminder Thatcher Demko having taken top honours in a North Division sweep.

Last year’s top two scorers in the NHL have resumed that posture atop the league, and are already separating from the pack. 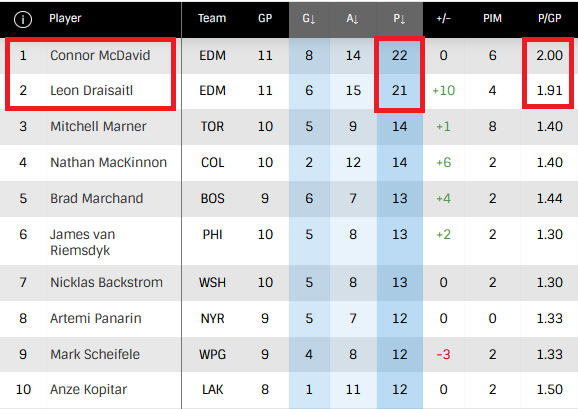 Not bad when your second highest  scorer has 50% more points than any other player in the league! Early days of course, but the last time two teammates separated themselves from the rest of the pack in such an extreme manner were (wait for it) Mario Lemieux and Jaromir Jagr in 1995-96. In the quarter century that has followed, only twice have teammates finished 1-2 in scoring by any margin — Tampa Bay’s Martin St. Louis and Steven Stamkos in 2013, and Draisaitl and McDavid in 2019-20.

Edmonton’s modern superstars currently lead or co-lead the NHL in numerous categories: McDavid in goals, points, powerplay points, and points per game. Draisaitl in assists, powerplay goals, and plus (among forwards).

So far this season they have combined for 43 points, on a team that has scored 38 goals. They have combined on the same scoring play 14 times, 7 on the powerplay and 7 during their occasional shifts at even strength. The Oilers have managed to score just 9 goals in which neither was involved.

The Oilers played 71 games in 2019-20 before the season suddenly ended with 11 games left on the slate. The club has now played exactly 11 games in 2021, so make it 82 games played since the beginning of last season. Here are the league’s top ten scorers in that span: 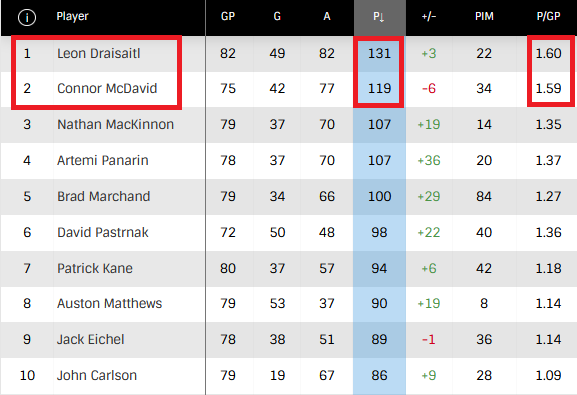 Make it 131 points in 82 games for Draisaitl. Not an official mark of course given the circumstances, but legitimate results all the same. The last time any NHL player hit the 130-point plateau in a season? One has to go all the way back to the Lemieux-Jagr duo, who both achieved the feat in that 1995-96 season referenced above. That’s some pretty heady (though unofficial) company for our man Leon.

Worth noting that not all teams have played the same number of games in that span, but the points per game column again isolates the two Oilers at nearly a quarter-point per game above the competition.

One last data dump in this vein. It was at exactly the halfway point of 2019-20 that Tippett broke up the Draisaitl-McDavid-Kassian line and made each of the superstars the centrepiece of their own unit. Draisaitl was paired up with RW Kailer Yamamoto, who had just been recalled from Bakersfield before that New Year’s Eve game against the Rangers. So let’s look now at the top 5 scorers over that span: 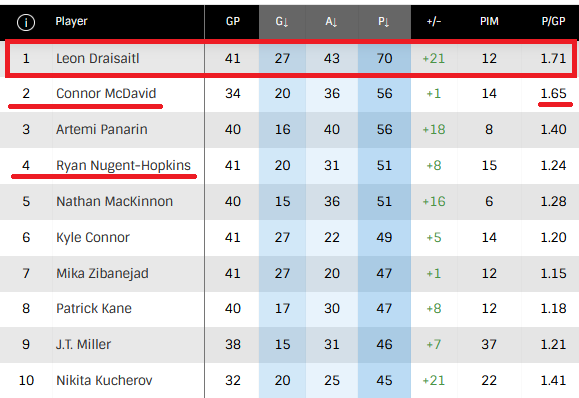 Just a huge gap between Draisaitl and the rest. Over this span the Big Diesel has led the league in both goals (4-way tie with Mika Zibanejad, Kyle Connor and Auston Matthews) and assists, and in both powerplay points and even strength points.  Significantly, Draisaitl’s +/- took a major surge in a positive direction immediately upon his move to centre.

McDavid missed 7 games in this span so is closer than he appears. Again, there is a quarter-point-per-game gap between them and the pack. Note Ryan Nugent-Hopkins — who has spent time on left wing with each man and on Edmonton’s lethal powerplay with both — hanging in this group.

Yamamoto, who doesn’t get many powerplay minutes, doesn’t appear on this list but he does on another. The league’s top six plus players during this interval include four members of the Stanley Cup champion Tampa Bay Lightning, and two members of the Edmonton Oilers, Draisaitl (+21) and Yamamoto (+24). For those who have written off the plus/minus stat as antiquated, let me restate in terms of 5v5 play only: Draisaitl has been on the ice for 46 goals for, 20 against (+26); Yamamoto 39 for, 14 against (+25). That’s roughly a 70% goal share for both, and some pretty serious outscoring in their first half-season together.

Bottom line: Dave Tippett’s decision to re-align his superstars at the midway point of 2019-20 remains his single most impactful decision as Oilers’ bench boss. Not only did it maximize the talents at the coach’s disposal, it has seriously reduced the amount of even-strength time that both are on the bench, when the rest of the team has proven vulnerable.

Previous articleEdmonton Oilers coach Dave Tippett on Evan Bouchard: “We're going to try to get him in pretty soon”
Next articleJesse Puljujarvi finds the range as the Edmonton Oilers down Ottawa 4-2: Game Grades

“Maybe I just don't have it”: Jesse Puljujarvi's crisis of confidence