Ken Holland’s busy day continued with his fifth player signing, and the second of a full-time NHLer. This one involves the return of a (somewhat) familiar face in left wing Tyler Ennis.

The Edmonton native was acquired by his hometown team last trade deadline for a fifth round pick in 2021, and delivered solid secondary offence with 2-2-4 in 9 regular season games, then 1-1-2 in 3 play-in contests. He suffered a fractured ankle and ligament damage in Game 3 of that series, but is reportedly recovering well from those injuries.

TSN reports a salary of $1 million, a $200,000 bump from last year’s rate but pretty reasonable given his good season. 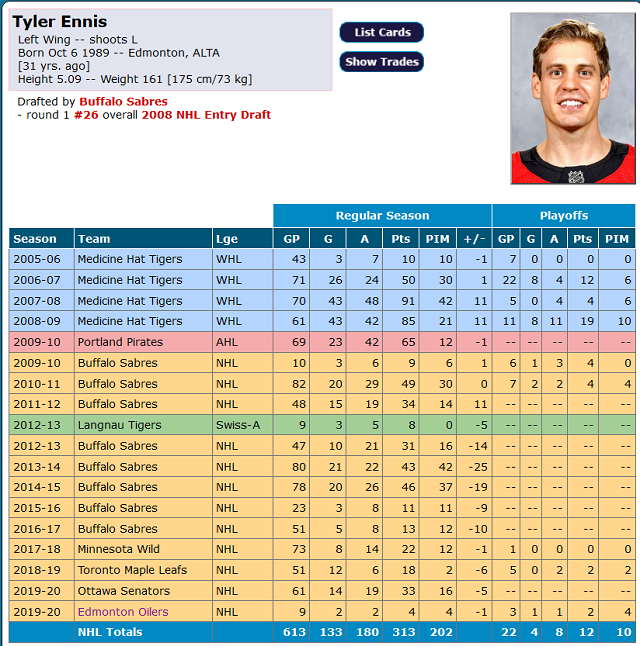 Ennis projects on the left wing of an entirely revamped third line. All three of Ennis, centre Kyle Turris and RW Jesse Puljujarvi have signed in the last three days, and will carry a very reasonable combined cap hit below $4 million. It’s a more offensive trio than recent third lines on this club, suggesting the fourth unit will ultimately be comprised of defence-first types that will also do some heavy lifting on the penalty kill. The new third line will see the bulk of its ice time at even strength, where they can legitimately be expected to chip in secondary scoring.

Ennis was always a natural fit on the Oilers from he day he was acquired, not to mention a popular one, so his return on the first day of free agency is not unexpected. A good player at a good price.