The Edmonton Oilers have trended up under GM Ken Holland. The right moves this summer could well put the team into the top drawer of NHL squads.

But how much different would the Oilers be right now if Holland had pulled off two huge deals last summer that he was rumoured to be interested in, the signing of goalie Jakob Markstrom and a trade for Arizona d-man Oliver Ekman-Larsson?

I’m not going to dig to deeply today into Edmonton’s attempt to sign Markstrom, reportedly to a seven-year deal at $5 million-plus per year.

Markstrom chose the Flames over the Oilers and proceeded to have a mediocre year, his worst in six seasons, with just a .904 save percentage.

Maybe Markstrom, 31, will bounce back. Maybe not.

Goalies are like that, hard to predict. Indeed, it’s hard to know how Markstrom’s season would have gone had he signed in Edmonton. Maybe he would have had a much better save percentage here.

It’s evident from the Edmonton offer that Holland saw the goalie position as a huge question mark on the Oilers and he was hoping to solve it long-term with Markstrom on an expensive but not killer contract.

If it wasn’t a great plan, it also wasn’t terrible.

If Markstrom had signed, the Oilers would have passed on Mike Smith and likely missed out on Tyson Barrie and Kyle Turris as well. But Evan Bouchard, in retrospect, looked ready to step up this year and the Turris signing was a significant mistake.

I’m going to give Holland a pass for offering such major term to Markstrom for now, even as I wasn’t thrilled with the plan. But I’m not so forgiving when it comes to the prospect of Edmonton trading for Oliver Ekman-Larsson.

When the Ekman-Larsson rumours heated up last September, Holland knew something that Oilers fans did not, that Oscar Klefbom was seriously injured and Edmonton was going to need to replace him at left defence.

Throughout the month of September 2020, Ekman-Larsson’s name constantly came up in terms of being a possible fit for Edmonton, though we can’t say with any certainty just how serious Holland’s interest was, or just what he was prepared to give up to acquire the Arizona d-man.

On Sept. 11, Bob Stauffer on Oilers Now brought up the rumour with his guests. Brian Lawton and Brian Burke, both of them former NHL GMs, said that OEL was still in the Top 15 d-men in the NHL, while ex-player Louie Debrusk wasn’t so sure. Big Lou, who is sharp cookie, said that OEL wasn’t a true No. 1 d-man because he did not dominate both ways any longer, with his defensive play not at the highest level.

In Edmonton, many fans and observers were keen about the prospect of trading for OEL.

My Cult colleague Kurt Leavins liked the idea and said he’d be OK if the Oilers moved a No. 1 pick for OEL. “That quality of D-man does not come available in this league often. Arizona would also have to take a couple million in salary back.”

“If OEL is available, then Oilers should be interested,” said TSN’s Jason Gregor. “The concern of possible final two years of deal being an issue are overshadowed by fact he is a legit #1 D-man now. And will be for at least five years. Don’t sell the farm, but Yotes aren’t in position of strength.”

And Jonathan Willis of The Athletic: :I’m surprised to write this – it isn’t the outcome I expected when I started collecting data – but I’ve come to like the idea of betting on Ekman-Larsson. The best-case scenario is excellent, and even the median outcome works, especially given the structure of his contract.”

Having not watched OEL closely, I wasn’t so sure. My impression was that OEL was a good NHL d-man at age 29 but hadn’t played like a true No. 1 d-man for two years. I worried about OEL being paid like a true No. 1 d-man at $8.25 per million a year for the next seven seasons. I preferred the Oilers go for a player like Tyson Barrie, who was a UFA at that time, on a short term deal.

On Sept. 18, Sportsnet’s Elliotte Friedman reported that Boston, Calgary and Edmonton had checked in on OEL’s availability.

Bouchard and a first round pick?

TSN’s Frankl Seravalli then reported on Oct. 1 that: “The Oilers are believed to have had preliminary discussions on acquiring defenceman Oliver Ekman-Larsson, the new No. 1 on the Trade Bait board, from Arizona. But there is a financial component to the potential transaction that would need to involve Arizona retaining a portion of Ekman-Larsson’s salary, which the Coyotes have not been willing to budge on. Top-end defensive prospect Evan Bouchard and the Oilers’ first-round pick could be involved in a deal.”

I saw that ask for OEL as being almost laughable, noting that OEL may have negative value over time because of his hefty contract.

Friedman reported that he didn’t think Edmonton was offering both Bouchard AND a first round pick: “I don’t believe that is what Edmonton was considering doing.”

In the end, OEL rejected any trade to Edmonton, but allowed Arizona to negotiate with Boston and Vancouver. Nothing happened on those fronts, with OEL later saying he never really wanted to move and preferred to play out his career in Arizona.

OEL proceeded to have a meh season with Arizona in 2021, reports Sarah Bird of the Five for Howling blog. “It makes sense to wonder if all the off-ice pressure affected his play this season. His 24 points in 46 games showed a decline in offense, but his defensive abilities also took a hit. If Ekman-Larsson allows it, (GM) Armstrong may attempt to move him again this offseason.”

I didn’t see OEL this year, but almost all his major statistics dropped across the board, which would confirm to some extent Bird’s review.

These stats aren’t definitive in rating the true talent of d-men, but they give us a sense how much their coaches trusted them overall and in key situations, with a major focus on how well they performed on the attack.

Oscar Klefbom of the Oilers ranked 19th, Darnell Nurse, 31st, with OEL coming in at 53rd. 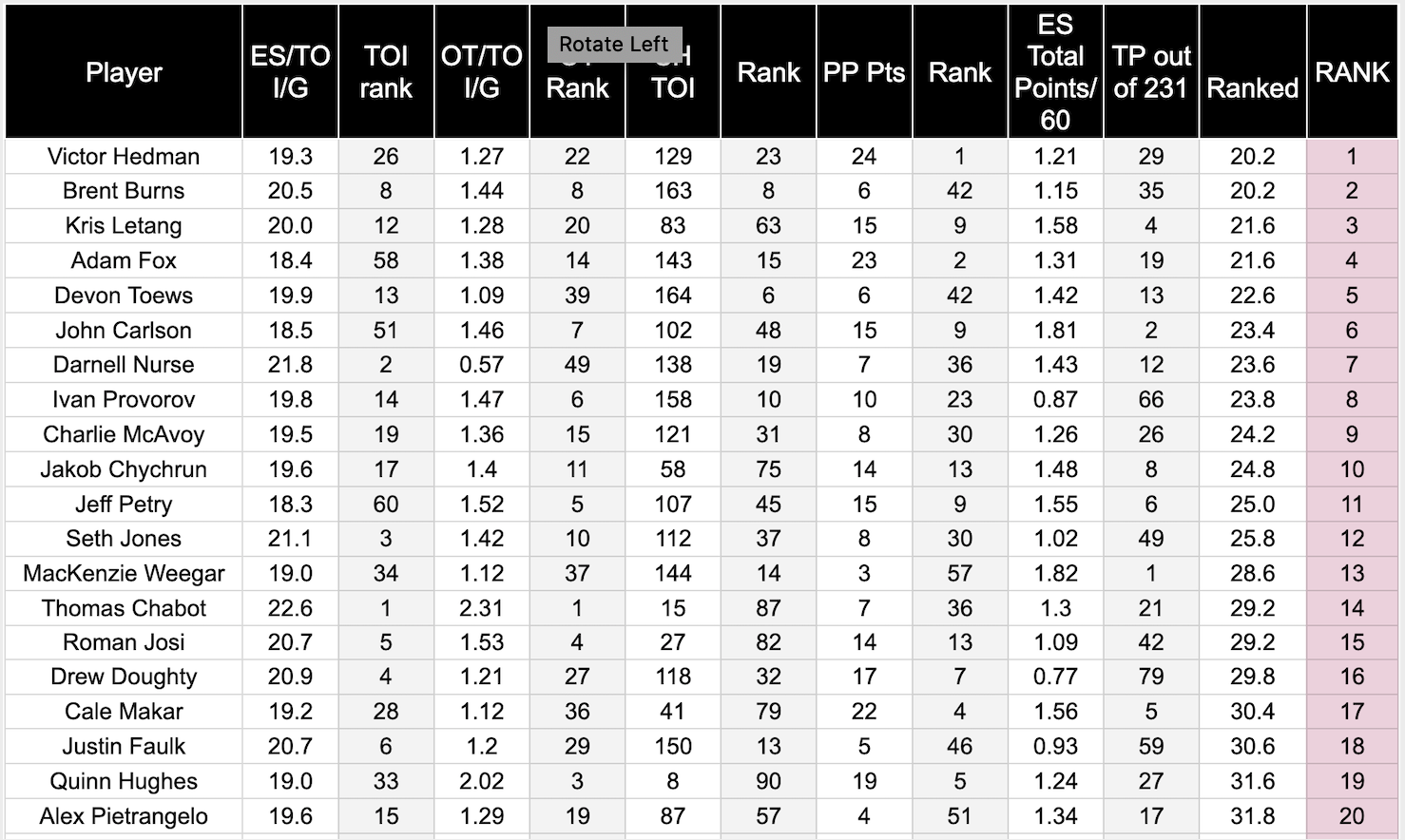 OEL has dropped from being a 25-minute per game d-man when he was 22 to 24 years of age to 21 minutes per game last season as a 29-year-old. He’ll turn 30 next month, he hasn’t had an all-star vote or a Norris Trophy vote in the past two seasons, he’s been overtaken at left defence in Arizona by Jakob Chychrun and he’s still got six years left on that whopper of a deal.

if Arizona does again try to move OEL this summer, as Bird suggests might happen, I’d be even less keen about him coming to Edmonton than I was a year ago.

In this case, however, we can’t hammer too hard to Holland for his interest in OEL for a few reasons.

First, OEL may still turn it around and play like a No. 1 d-man in coming seasons. It’s not a great bet to happen, but it wouldn’t be a shocker. Second, we don’t really know how keen Holland was on this player and we don’t know what he would have paid to acquire him. Maybe the deal Holland actually had in mind would have made sense for the Oilers.

The failed OEL deal has the feel of a dodged bullet but I can’t say that with any certainty.

But, for now, I’ll put both Markstrom and OEL in the category of near misses, deals I’m glad never happened, as they both could have crippled Edmonton’s salary cap structure for years to come. This is the ever present risk of offering long-term deals to players entering their 30s.

Creating competition is the next-best thing the cap-strapped Edmonton Oilers can do to win: 9 Things