This in from Reid Wilkins of CHED, the latest news on the Edmonton Oilers lines, which sees Tyler Ennis back in the line-up and Doiminik Kahun sitting:

Archibald not on the ice. 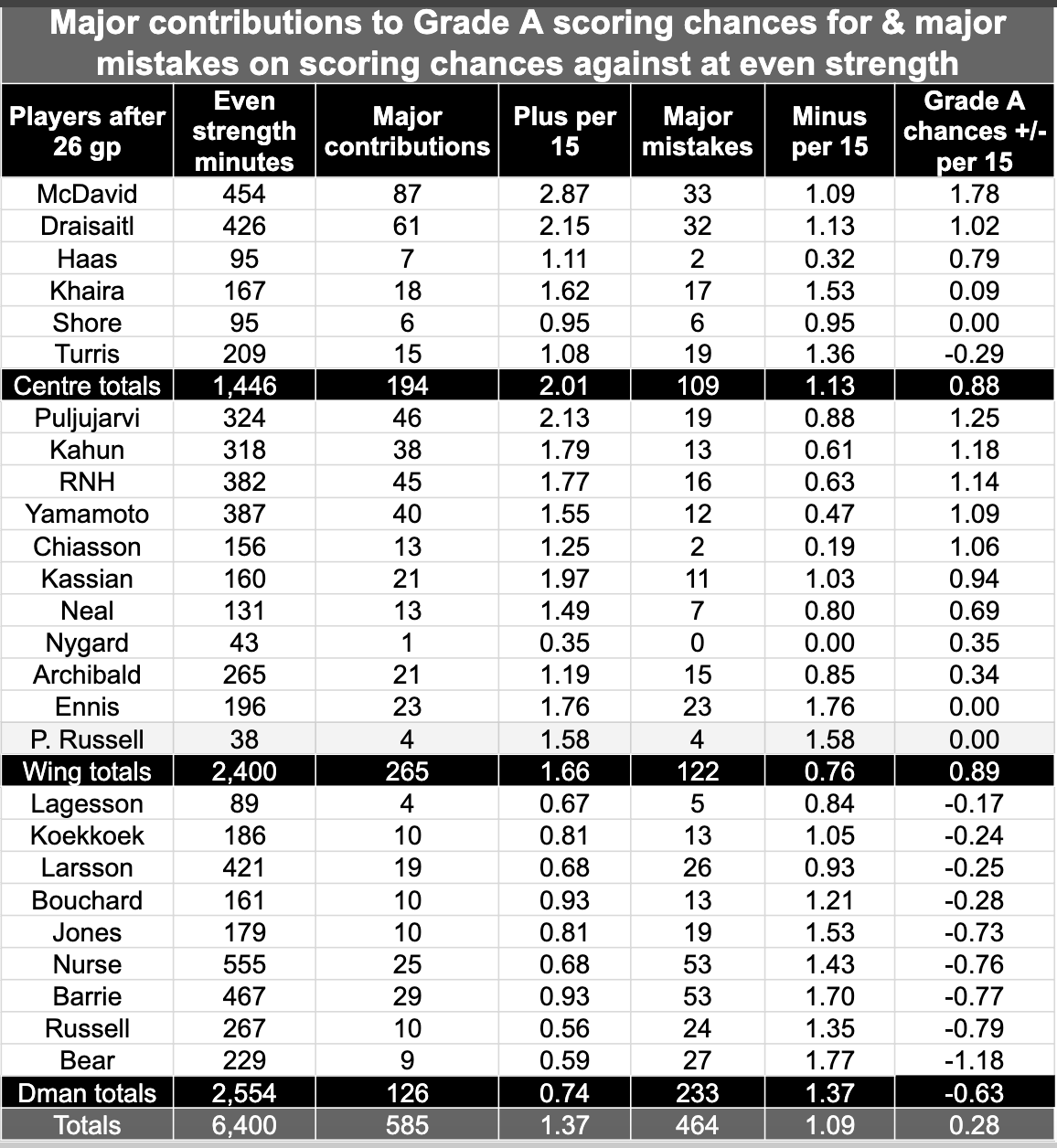 1. Tyler Ennis should provide a jolt to the second line on the attack. He’s a more of an offensive driver than Kahun. Even though he’s played limited minutes on a top line, Ennis is contributing to almost the exact same rate of Grade A chances at even strength as Kahun is, and he’s out-pointing Kahun, 1.83 points per 60 to 1.52 points per 60.

2. It’s on the defensive side of the puck that Ennis has issues. He’s more likely than any other Oilers winger to lose a battle, make a poor defensive read or allow a point shot that helps cause a Grade A scoring chance against. In fact, his defensive play isn’t just a little bit weaker than we see from other Oilers wingers, it’s much weaker. He’ll be counting on Puljujarvi and RNH to carry the weight in Edmonton’s end.

3. As an NHL player, Nugent-Hopkins is a strong winger and an OK centre. He tends to get over-powered in the low defensive slot by bigger attackers. But he’s a strong puckmover. Combined with two players in Ennis and Puljujarvi, who can drive the play on the attack somewhat, this line has a change to make some noise in the opposition zone. Where I worry about it is on defence. When it comes to breaking up the cycle, they could struggle.

4. The top line of Connor McDavid, Leon Draisaitl and Kailer Yamamoto is stacked. In the past when we’ve seen McDavid and Draisaitl together, they haven’t been paired up with a smart, swift forechecker like Yamamoto. He doesn’t need the puck to do well, so he’ll be a glue player on this line. The trio could do some real damage, but it always creates the disadvantage of moving a top two-way centre in Draisaitl and replacing him with a lesser two-way centre in RNH. I’m in that school that believes that hockey is one up the middle of the ice, with strong goalies, strong defenders and strong centres, so my own preference is Draisaitl at centre. But given the utter lack of chemistry we saw from almost every Oilers line against Toronto and in the first period against Calgary, coach Dave Tippett had to shake the box somehow. Re-unting McDavid and Draisaitl is a super hard shake.

5. Every time the third line of Jujhar Khaira, Devin Shore and Kyle Turris was on the ice against Calgary, I was expecting the Flames to score. And they did score once. Here is hoping that Josh Archibald isn’t so banged up that he misses a lot of playing time. He’s sorely missed on this line. If he is hurt, it might be a good idea to call up Tyler Benson and Cooper Marody from the AHL. It will take a few weeks for them to get through quarantine, but they have little to prove at the AHL level. I’d prefer to see either of them in the line-up over Turris, who has struggled to get his game up to speed.

6. On defence Ethan Bear finally had a more steady game against Calgary. It was welcome to see, as he was a solid defender last season. He’s got a group of fans who argue he’s played well this year, mainly based on his on ice numbers, such as his Corsi and Fenwick For percentages.

I put little weight in this kind of rating myself.  I put far more weight in a player’s rate of individual scoring chances for and against, data that we collect at the Cult of Hockey.

When it comes to ranking a player like Connor McDavid compared to other Oilers forwards, these scoring chance +/ rates actually get it right. It ranks McDavid in first where he belongs, not 6th or 9th or whatever.

Why does individual scoring chances +/- get it right with McDavid while other metrics are spotty? Because it focuses on individual actions of the McDavid (and other players). Other metrics, such as Corsi and Fenwick, track how the team does when McDavid is on ice. He gets minus marks for crappy play of others and they get credit for his good plays.

Of course, other fans are free to use whatever stats they want to rate players. Fill your boots. I am explaining why I don’t much weight in that kind of analysis using on-ice “possession numbers” for a player like Bear.

I question any number that often gets it so wrong with McDavid, stats that fail to rank him as the best two-way player on the Oilers, and also paint a poor picture of just how dominant he is.