Unlocking Jesse Puljujarvi: Some thought he was “dumb” but he's a big-hearted guy and a balanced player, his agent says

This in on Jesse Puljujarvi, from an interview with his agent Markus Lehto by Sami Hofren of Finland’s Ilta Sanomat, where Lehto describes some of Puljujavi’s challenges in his first stint with the Edmonton Oilers and how he’s now overcoming them, breaking out of his scoring slump with a two goal-game against Ottawa.

The translation comes through Google translate, and a bit of guess work on my part.

Said Lehto: “Many judge Jesse on mediocre English and somehow consider him a fool, but this is a big-hearted guy who is a balanced hockey player. Hopefully the successes will bring more self-confidence and energy to the right things.”

Google translate can be a bit off, as seen in the headline below from that same newspaper about Puljujarvi’s big game against Ottawa:

Oilers fan Mari Lonnberg, who lives in Finland, provides this summary of the same news report: “Puljujärvi’s agent Markus Lehto is quoted saying that many thought because of Jesse’s poor English that he is dumb, when in reality he is a big hearted guy and level headed athlete. Lehto also stated that before Jesse could have (been) frustrated from the dry spell, but now Jesse has kept on smiling and kept on working. His support network is now stronger too, when his girlfriend Monica is living with him in Edmonton. Lehto mentions that Monica’s father Juha Malinen, a well known football coach here in Finland has also been guiding Jesse. Lehto spoke with Holland on Monday and according to Lehto the feedback was good. Jesse has played as expected.”

1. Jesse Puljujarvi’s popularity is peaking in Edmonton right now, something that often happens after he has a big game, which he did against Ottawa, scoring two goals and playing with such confidence he looked like he might well be the Second Coming of Blake Wheeler, a big, smart, offensively-gifted and defensively sound winger. How glad are you that Oilers GM Ken Holland found a way to convince Puljujarvi to come back to Edmonton, as opposed to trading him for a second round pick or two and then seeing him have games like this in Dallas, Anaheim or Montreal?

2. Puljujarvi has been inconsistent this season. He’s had three great games, a handful of “meh” ones and a few stinkers that have left me wondering if he’ll ever get it. Some games the puck slides off stick, he loses battles and gets in the way of his teammates. Other games he combines so well with Connor McDavid and Ryan Nugent-Hopkins that he looks like the perfect ingredient for the top line, a big, fast forechecker who can pop pucks away from opposing players and knows what to do with it when he gets full possession.  I’ve never had those vibes more strongly than the Ottawa game where McDavid and RNH were actually looking for Puljujarvi to make plays, treating him as an equal on the line. I’m starting to wonder if it’s a confidence thing, if in those games where he’s made up his mind he’s going to go for it and confidently make plays no matter what that Puljujarvi starts to have success. My hope is that now he can string together three or four games where he brings that “A” game.

3. Part of the issue with Puljujarvi this year has been while he’s contributed to a lot of great scoring chances and made not many mistakes on scoring chances against, he’s had weak puck luck, in that the Oilers failed to score on the great chances where he’d get a goal or an assist, but the team got scored on when he did make a mistake. This kind of bad luck is common for players in the short term, but it negatively impacts perception of that player. We all forget the mistakes that come before our home team goalie bails out everyone by making a big save and we obsess on the miscues that happen when a goal against is scored. It’s how we’re wired. We’re flawed evaluators, at least until we realize we’re prone to this kind of assessment. Oilers coach Dave Tippett discussed after the game Puljujarvi’s scoring chances-to-points ratio: “He’s one of our top guys being around not just chances himself but also helping create changes for other people. You’d like to see him rewarded for that work and tonight he got rewarded for it.” 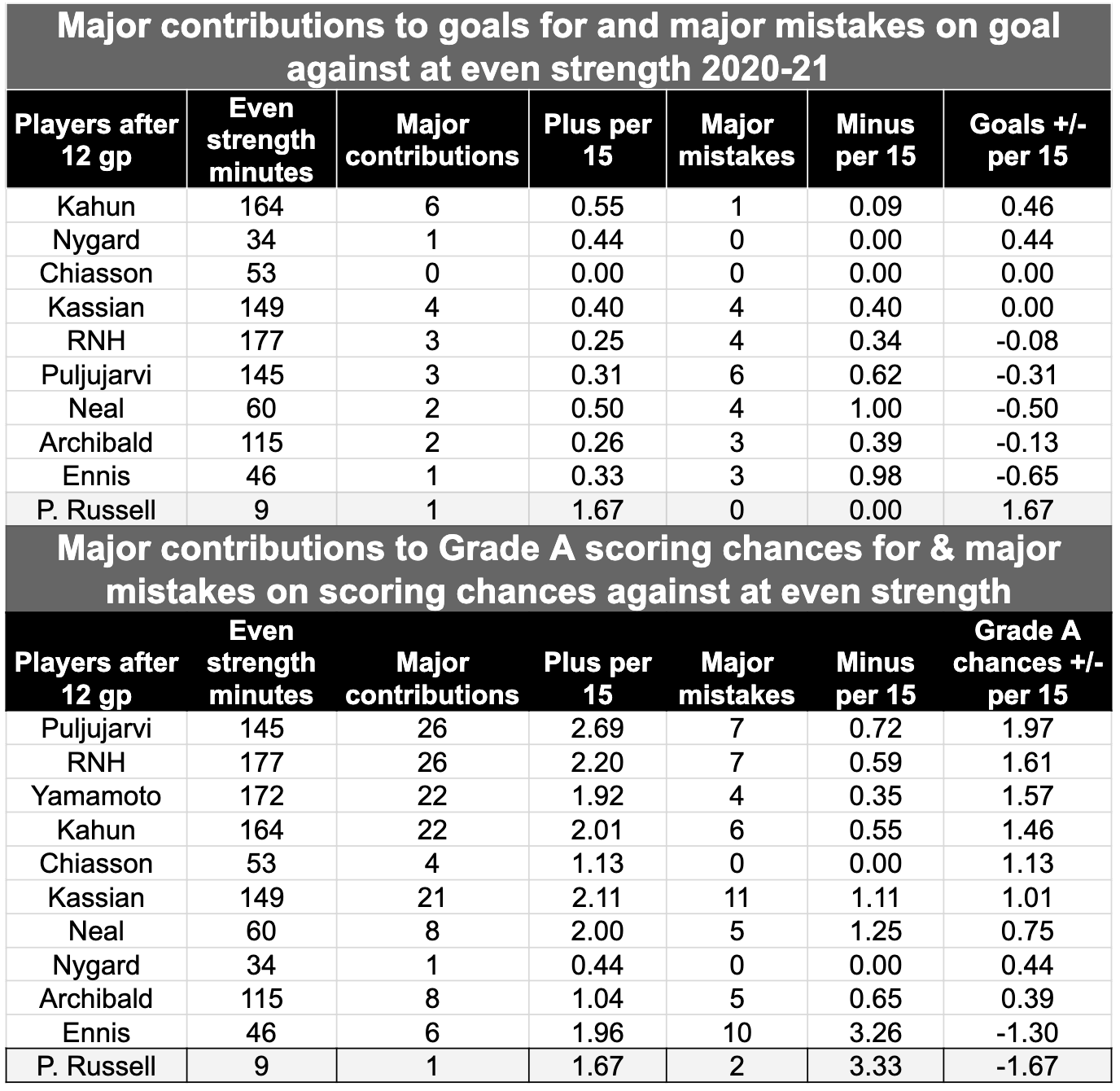 5. This summer, in returning to Edmonton, Puljujarvi took ownership of some of his troubles here in the past. When he was still musing about returning to the Oilers, the player said from Finland: “I have grown and I see things a little differently. There’s now a different GM and head coach out there. Build a winning team in Edmonton. It may be possible that I will still be playing there.” This new-found maturity, along with the new support system that Lehto mentions, seems to be helping Puljujarvi get through the high level of adversity that NHL players regularly face.

6. For the Oilers, this is all good news, perhaps very good news, perhaps even utterly brilliant news. For a team to succeed it needs its first round picks to turn out so if players like Puljujarvi, Evan Bouchard, Philip Broberg and Dylan Holloway do so, just as we’ve seen in recent years with RNH, Oscar Klefbom, Darnell Nurse, Leon Draisaitl, Connor McDavid and Kailer Yamamoto, Edmonton will most definitely be in Stanley Cup contention for the next five or six years.

7. This summer I argued it would be a good idea to try Puljujarvi with McDavid based on their past success together. Glad to see that prediction is holding up OK. The exact prediction? “Has Puljujarvi earned it? He spent a year building back his game in Finland, where he put up good numbers. He’s off to a great start in the Finnish league this year. He’s a decent shooter and forechecker and strong skater, who also hustles on defence. He’s a strong passer. If he were to return, why not give him a run of games with McDavid? If in their first 400 minutes together they can replicate that 61.5% goals for, the pairing might just be considered a success this time.” 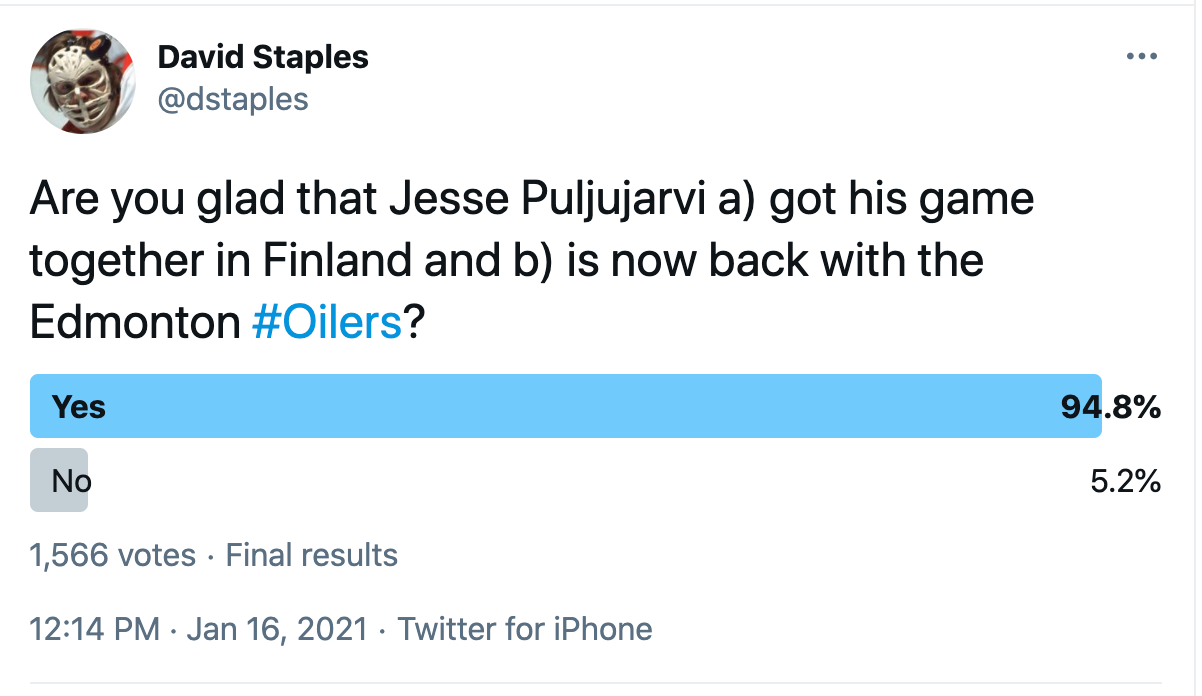