Unproven Stuart Skinner to get the start for Oilers vs. Ottawa tonight, reports Ryan Rishaug

Under a cone of silence from decision-makers of the actual hockey team, rumours have been flying as to which goaltender would be getting the start for Edmonton Oilers tonight. Recently-activated Troy Grosenick did a game-day interview on the club’s website and advised he would not be the starter. The obvious conclusion was that meant the only other netminder on the roster, Mikko Koskinen, would get his 11th straight start.

Then TSN’s ever-reliable Ryan Rishaug dropped this stunner on Twitter:

That would be Stuart Skinner, dropped to the taxi squad to make room for Grosenick yesterday. The 22-year-old Edmonton native acted as Koskinen’s backup through the first 9 games due to the injury to #2 Mike Smith, the loss on waivers of would-be #3 Anton Forsberg, and the unavailability of repolacement #3 Grosenick due to COVID protocols.

Out of the blue, he appears to be back on the roster, in the line-up, and destined to take the crease tonight.

Dailyfaceoff.com also projects Skinner on their Starting Goalies page, though cautions it is “unconfirmed” with “no goalie details yet”.

A third-round pick in the 2017 NHL Draft, Skinner turned pro a year later and divided time between the Oilers ECHL and AHL affiliates in Wichita and Bakersfield, seeing the lion’s share of his time (41 games) in the lower league in his first year, then in the top minor league (also 41 games) in Year 2. He recorded a 3.31 goals against average and .892 save percentage on a struggling team that was on the outside looking in for playoff contention when the curtain fell on the season.

The Oilers will also be making a number of other line-up changes in the wake of Saturday night’s pulsating 4-3 overtime win over Toronto, a game which saaw top-pairting d-man Ethan Bear leave with an apparent upper body injury. Rishaug again:

Let’s disentangle some of that as best we can.

Leaving a game-night line-up that looks something like this: 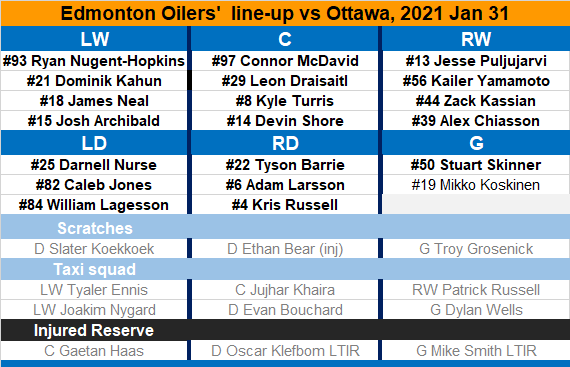 Highly speculative. If I get this one right, next move is to buy some lottery tickets. (Narrator: It wasn’t (quite) right. See bottom of post for updated line-up.)

Tonight’s opponents, the Ottawa Senators, come to town on a seven-game losing streak, having suffered consecutive three-game sweeps at the hands of Winnipeg and Vancouver. The last five of those all came in regulation by a combined score of 7 for, 26 against. While the Sens may look like the free space on this season’s Bingo card, the club has been resting since Thursday while the Oilers spent a lot of emotional capital squeezing by the Leafs on Saturday night.

The Sens will reportedly be missing a key defender of their own in the person of Thomas Chabot, who got banged up in their last game in VanCity, even as he finished the contest with 24 minutes of ice time. 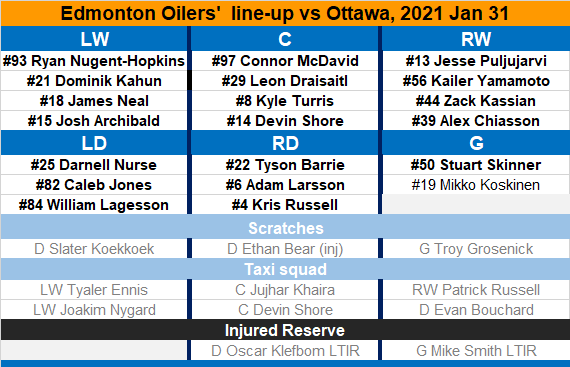 Turns out Gaetan Haas is ready to go, and will slide into the 4C spot over Devin Shore, who has been moved direct to the taxi squad. Presumably #4 goalie Dylan Wells has been assigned from the taxi squad to Bakersfield. Colleague David Staples has more details on the Haas addition here.

The rest of tonight’s lines and pairings (and starting goalie!) are as we had projected earlier.

LEAVINS: How tough is it to win in the NHL? 9 Things

STAPLES: Game Grades from a thrilling 4-3 Oilers OT win over the Leafs

LEAVINS: Oilers were never going to be as good without Klefbom

Previous articleMajor depth moves as Edmonton Oilers going with Gaetan Haas and more
Next articlePlayer grades: Led by who else, Draisaitl & McDavid, Edmonton Oilers outscore their mistakes to top Sens 8-5