What is Tyson Barrie worth to Edmonton Oilers on a new deal?

On Oilers Now today, Mark Spector and Bob Stauffer speculated on how much Tyson Barrie might get a new deal.

“Edmonton hasn’t called what I like to call an offenceman forever,” Spector said. ” I mean forever they haven’t had a guy like Tyson Barrie.”

Spector suggested that $5.0 to $5.5 million per over three years might be the right number for Barrie.

“That’s probably in the range of what I see too,” Stauffer said.

Barrie and Khaira are now listed as day-to-day, with McDavid and Smith evidently given days off to rest up. 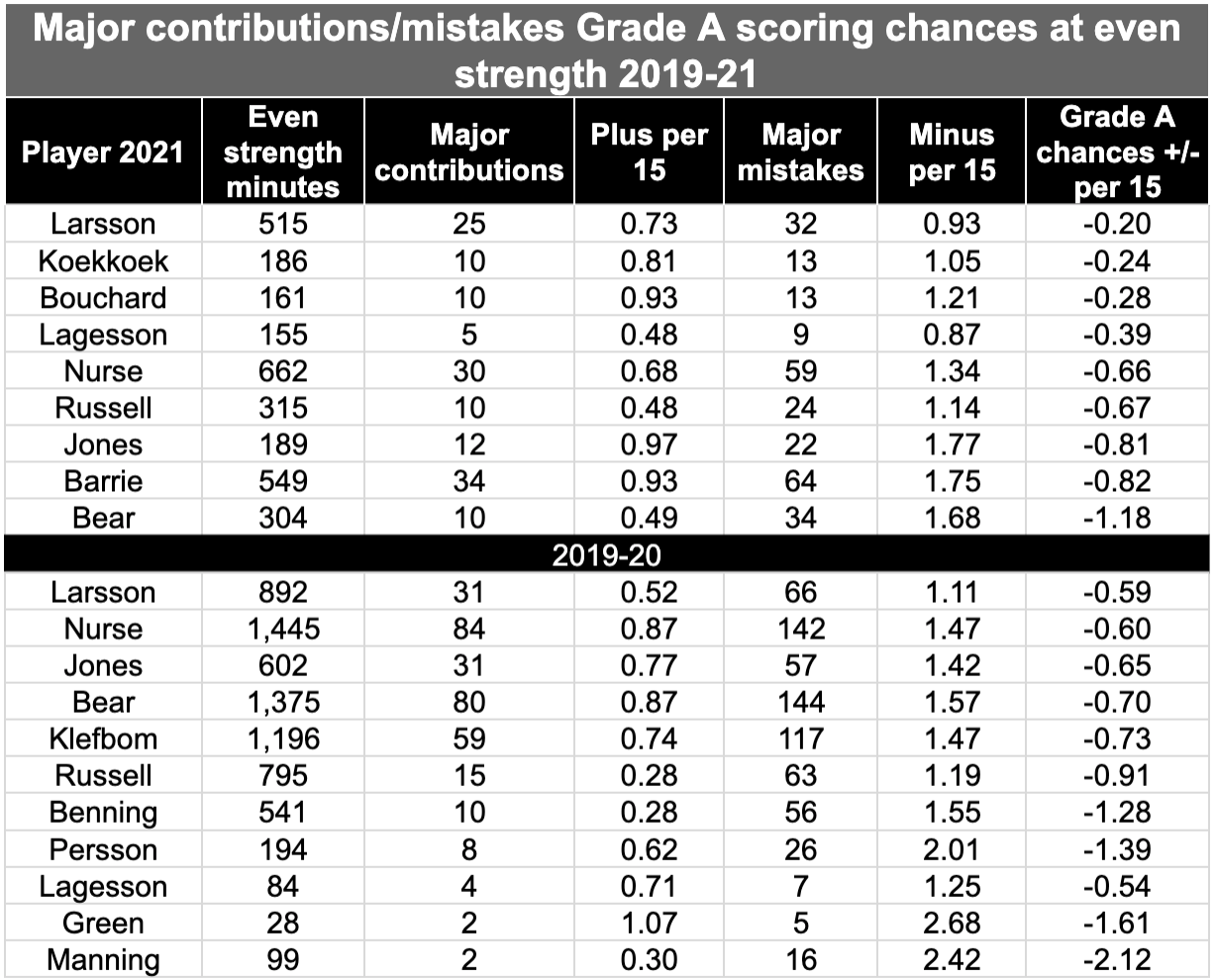 1. I like much about Barrie’s game fine. I don’t love it but I like it. He’s all offence and no defence but he was a good signing this year. He filled a hole in case Evan Bouchard wasn’t ready. But i’m not so keen on signing Tyson Barrie just now at least, not when: the Oilers have young players in Evan Bouchard, Caleb Jones and Ethan Bear who can all move the puck; not when Edmonton’s money will be extremely tight with the flat salary cap; not when Adam Larsson, the team’s shutdown d-man, is more integral to the future of the Oil; and not with abundant prospects on defence coming, like Philip Broberg and Dmitri Samorukov. Maybe if Barrie continues to excel on the attack and improves his defensive play I’ll change my mind on that. But right now I see a player that isn’t much better than Bouchard, if he’s any better at all. Barrie would block Bouchard’s development as a top power player if he gets a new deal.

2. It could be that Edmonton loses Ethan Bear in a trade or to Seattle in expansion. If that happens, then it makes more sense to bring back Barrie. But I’d be comfortable with an Oilers defence that in coming years runs Larsson in the shut-down role, Bouchard as the top offenceman, as Spector puts it, and Ethan Bear on the third pairing. That would be three solid right shot d-men, with Bouchard having a real shot at being exceptional. I just don’t see how Barrie fits so long as Bouchard is here. You need to pay one or the other for their power play points, not both, and I suspect Bouchard will be even better on the power play than Barrie.

3. Barrie, Jones and Bear all have strong aspects to their game, namely moving the puck well. But you’ve got to be wilfully blind not to have noticed the high number of major mistakes each of them making in their own zone. In the case of Jones and Bear, both of them are making more such mistakes than they made last season.

4. Of course, every single NHL d-man is going to make major mistakes on both Grade A chances and goals against. It’s difficult to avoid them, in particular, if you play against the NHL’s top forwards game in and game out, like Darnell Nurse and Adam Larsson do (and Barrie has done lately when paired with Nurse). Having tracked these mistakes on the Oilers for a few years now, I’d suggest that any defenceman who can limit such mistakes at even strength to around 1.0 per game (15 minutes of even strength playing time) is doing well at his job, especially if he’s playing heavy minutes against tough comp.

6. Not doing so well? Leaking chances against at too high a rate? Bear at 1.68 per 15, Barrie at 1.75 per 15 and Jones at 1.77 per 15. Oilers coaches evidently think Barrie’s offence makes up for his defence, but it’s no surprise that Bear and Jones have missed playing time and bene on the third-pairing. So far this year they’ve struggled with defensive consistency.

7. If you want to go over our work, here are our time-stamped and searchable scoring chances and goal findings for all 31 games.

8. We all have a natural tendency to focus most on the plays where a players helps his team score or makes a big mistake during a sequence of pain leading to a goal against. If a high percentage of a player’s mistakes on Grade A chances end up in the Edmonton net, often due to bad puck luck or bad goaltending, that can shake our faith in that player. Earlier this year, Larsson’s reputation suffered because of this downward dynamic. Right now it’s Bear. Yes, he’s made a high rate of major mistakes on Grade A chances against, but a high percentage of them have ended up in the Oilers net, 14 out of 34, 41.2 per cent. Compare that to Nurse, who has made 59 major mistakes o Grade A chances, but just 15 have ended up in the Edmonton net, 25.4 per cent. These percentages distort both our view of Bear, for the worse, and of Nurse, for the better.

McCURDY: Carnage in Calgary, with some injuries and low player grades

LEAVINS: Ken Holland’s challenge is to find the balance — 9 Things

Previous articleHave COVID-19 variants pushed Canada into a third wave of the pandemic?
Next articleLondon, Ont., team researching COVID-19 impacts on brain zero in on ‘microbleeds’

Could the 3rd time be a charm for the Edmonton Oilers and Sam Gagner: 9 Things