Kris Russell is out of action for now. He’s not practicing due to nasty hit/boarding delivered by Matthew Tkachuk ten days ago. A lower body injury, the reports said.

It’s uncertain when Russell will be back, but my prediction is that at some time in the coming playoffs, the Edmonton Oilers are going to turn to Russell once more and that he’ll likely find a way to stick in the line-up.

Russell’s isn’t just the Oilers second or third best defensive d-man — after leading slugger Adam Larsson and possibly Darnell Nurse as well — he’s also the most reliable one when it comes to avoiding unforced errors. He’s not nearly as good as moving the puck as Caleb Jones. He’s not the hitting, hammering physical force that Dmitry Kulikov  and William Lagesson are. He doesn’t appear to have the all-around game that Slater Koekkoek displayed this year before he got injured.

I can quantify this claim if you’re looking for that kind of evidence. For the last 10 years at the Cult of Hockey we’ve done video review of all scoring chances for and against the Oilers.

We review videotape to figure out what exactly went wrong on each Grade A chance against. We’ve noticed certain trends in that time.

It’s expected that even if the best d-men are going to make major mistakes on ugly chances against, especially if they constantly face tough competition like Darnell Nurse does. It’s also expected that they will allow nasty slot shots and and dangerous passes into the slot now and then. They will lose some battles and get lost in coverage now and then. These things happen to every d-man, even the greatest, smartest and toughest of defensive d-man, with Larsson being a good candidate for that kind of accolade this year.

What really hammers a team, though, are bad mistakes on Grade A chances against, unforced errors that lead to the most dangerous chances of all, 5-alarm shots that have more than 33 per cent chance of going in.

Turnovers are a prime example, as a bad turnover often ends up in your team’s net in a split second. After such a turnover there’s often no time for anyone else to recover, just scramble.

In his short time with the Oilers, Kulikov has made three such turnovers. That’s a high rate for 115 minutes of play, but with such a small sample size, it’s best not to make too much of this just now. But in 568 minutes of even strength play Russell has made not one glaring turnover that has led to a Grade A scoring chance against. Not one. In a similar amount of minutes as Russell, Ethan Bear has made ten.

When it comes to bad pinches, which often lead to two-on-one breaks against, and to allowing breakaway passes, Russell has made just two of them combined. In far fewer minutes Jones has allowed seven.

This is why I say that when the coaches comes to crave safety and reliability above all else, as they will at some point in the playoffs, Russell is sure to draw into the line-up and a good bet to stay in. 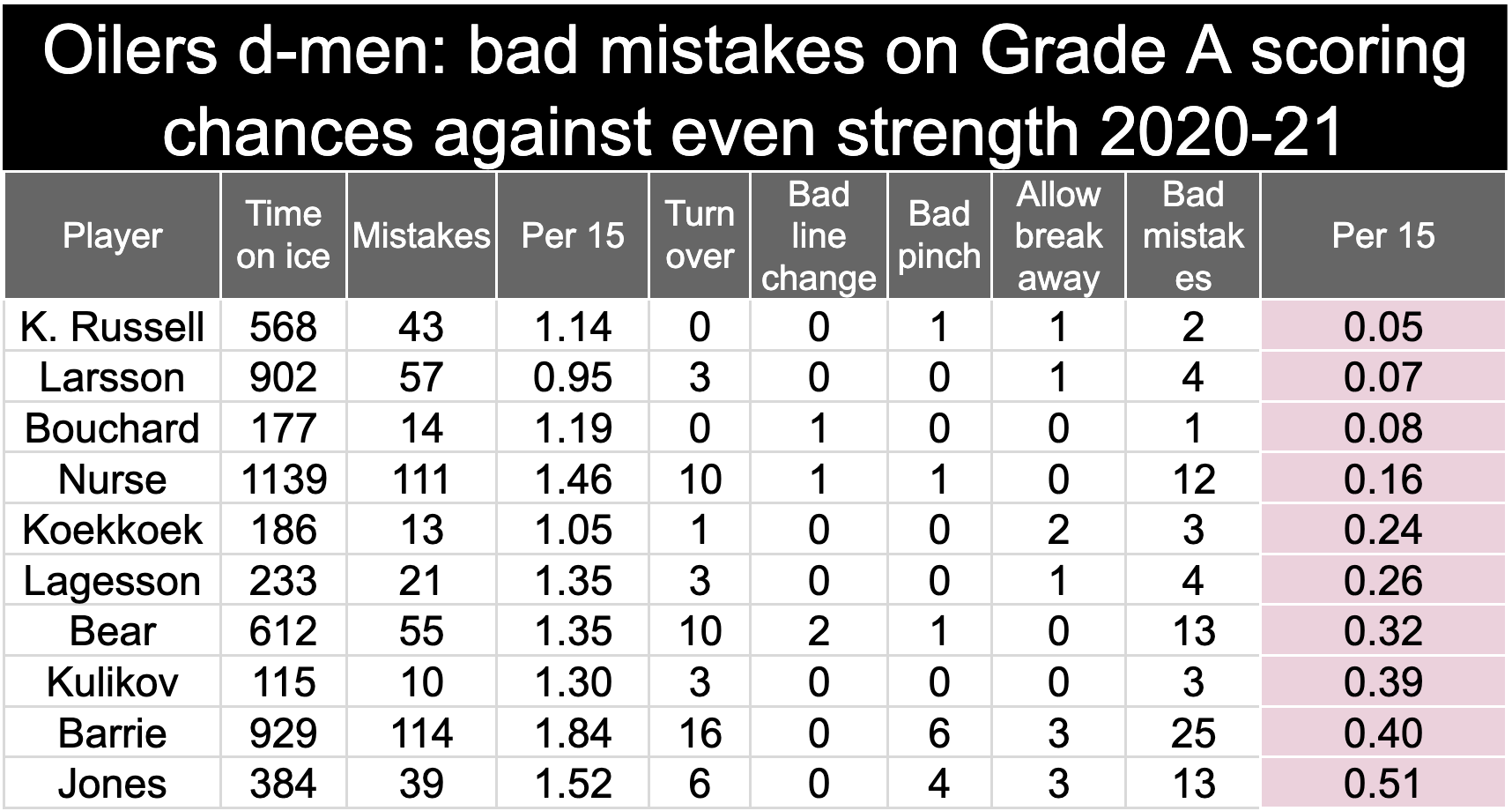 The latest line-ups for today’s game? Here is what Oilers coach Dave Tippett rolled out at Friday’s practice, with Kulikov missing due to a day-to-day injury: