Why is opposition to lockdowns, masks and science growing? The psychology of defiance explained

Many Canadians have swapped out their masks for protest signs that call for the defiance of COVID-19 lockdowns.

“There’s no doubt that the sway of anti-vaxxers, anti-maskers and those who are suspicious of government overreach have had their profile grow substantially,” said Timothy Caulfield, Canada Research Chair in Health Law and Policy at the University of Alberta.

“I think they’ve both grown in numbers, but more importantly, they’ve grown in significance… Their actions have a real impact in the context of creating vaccine hesitancy, in the context of causing individuals not to adopt the preventative measures that we need.”

Even though their numbers have climbed, Caulfield says they’re still not the majority.

“There is this small group of Canadians… their voice is loud, and social media has allowed their voice to be loud,” said Caulfield.

In March, the Center for Countering Digital Hate found that 12 anti-vaxxer accounts, labelled the “Disinformation Dozen,” were responsible for two-thirds of vaccine disinformation circulating online.

Conforming to the health restrictions needed to curb the spread of COVID-19 is not a walk in the park. According to Steve Joordens, partying with friends, dining at a restaurant, or visiting distant family were not ‘evil’ behaviours until the pandemic made them so.

“Sometimes, I thought of it like a funeral,” said Joordens, a psychology professor at the University of Toronto Scarborough.

But defying lockdown because you’re fatigued by the pandemic is completely different than what many of these protesters are doing, which is denying the science behind masks, vaccines and lockdowns.

Psychologically, experts say the difference between the two groups of people is striking.

“The deniers are a whole other kettle of fish,” said Joordens.

“(Their actions) seems so counter-rational that it has to be emotionally fuelled.”

There’s a reason many of us tend to follow government restrictions. Joordens says as humans, it’s within our nature to submit to authority.

But with mixed messaging from the government and mounting criticism on how it’s handled lockdowns and vaccine distribution, many people’s trust in authority has waned in recent months.

“This comes at a point where we’re already in this sort of post-truth world, where people I think are just distrusting data in general,” said Joordens.

“There’s people who think everybody is lying to them.”

It may also be hard for deniers to make sense of the consequences of breaking health restrictions because, according to Joordens, humans have trouble thinking rationally about things that are not concrete.

“The consequences of cheating in these COVID rules tend to be very abstract. Somebody could get sick somewhere, and it could lead to negative events. The more abstract and distant the consequences, the poorer we are at really thinking about it. ”

There’s also the presumption that many are still struggling to come to terms with why the pandemic is happening in the first place.

“In this case, there are a lot of people who have lost their networks, lost their livelihoods, and with the government locking things down, they have somebody to blame right there in front of them.”

There’s still a lot more complexity as to why these movements have grown.

Hauser and Joordens say an integral part of humanity is forming connections, and deniers seem to have found a sense of community in these protests.

“Now you can find people with the same attitude as you anywhere on the internet, and find a way to connect with them. And even if you can’t find people that share these ideas, you can find information that reinforces your belief… So it’s not a situation where people are not thinking — they are,” said Hauser.

Some of them may not have been disbelievers in the science to begin with. Perhaps, according to Caulfield, they were part of the “movable middle” — individuals who are initially on the fence and can be swayed by powerful anecdotes or information that taps into their confirmation bias.

Because many of the protesters’ actions are rooted in deep emotion, Joordens and Hauser say it will be counterproductive to bulldoze over their feelings and present them with further facts and numbers.

“If we really want more people to comply, this approach we’re using of numbers, and rules, and facts, and data — that’s our frontal lobe… Our frontal lobe is exhausted. We have to talk to our limbic system — that’s the emotional part of our brain,” said Joordens.

That means we need more emotional and real stories of people losing family members and loved ones, of nurses and doctors breaking down in intensive care units, of people contracting COVID-19 and dying alone.

But that doesn’t mean we should ditch the data altogether.

Caulfield says science and those who disseminate it need to move smarter and faster than misinformation, which means getting creative with messaging in a shareable and engaging way.

“We have to get on those social media platforms — on Twitter, on Facebook, on TikTok, on Instagram — with the good stuff — language and imagery that resonates for those communities.” 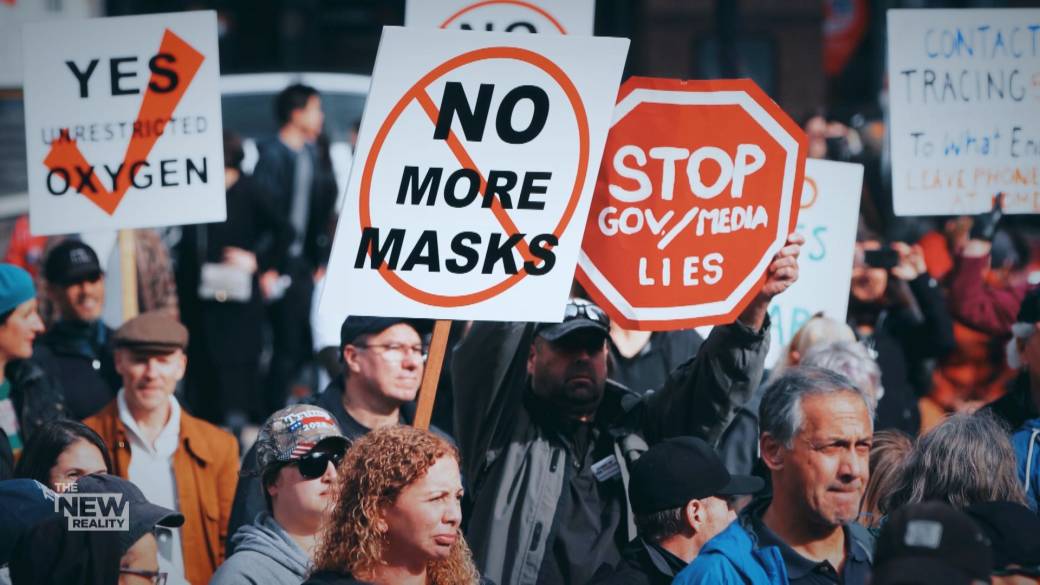